Hit enter to search or ESC to close
BooksMiddle EastPoliticsWorld 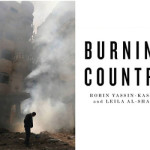 Marx and the Prophet an interview with Gilbert Achcar