Proud to be a Tunisian

Yunus Khazri has lived half his life outside Tunisia. When he was a young man, he left his native country for Paris hoping to liberate himself from what he experienced as a suffocating and conservative context. His father was an Imam and he was among the few in his family who had a passion for texts, so he was trained in Islamic theology and law by his father and studied Islamology in France. Shortly after his arrival in France, Ben Ali came to power in Tunisia. At that time, Yunus was worried and could not know that he would not return to his country for many years. Today, he feels proud to be a Tunisian. When I visited him in his house in Amsterdam, he could not have looked happier. 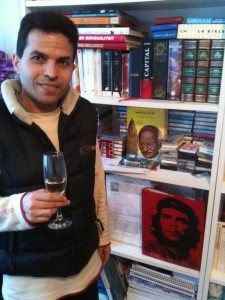 “I hope that they know what they’re doing. Of course, I am worried that this revolution could turn out very badly, but at the moment I am very hopeful. In Tunisia, people just want more freedom. We don’t have a terrifying ideological leader – we are Muslims but not Islamists – and are not looking to impose only one view. The people just want democracy, something that will hopefully inspire other Arab countries. Some say that it is better to live in poverty than to live under Ben Ali. This is really essential. It’s an insight about human dignity and the importance of freedom. In the beginning, he wasn’t that terrible but later on things changed for the worse. In the West, no one paid much attention to Tunisia. If something happens in for example Iran, the entire media writes about it. But in the case of Tunisia, no one cared really. Moreover, even though a dictator was running the country, Tunisia was an ally of the West. President Chirac once even said that in Tunisia there is enough food, education and no war, so people should stop complaining. But the opposition in France thought differently and today we see that reality resists such discriminating simplifications. People are not satisfied with just bread. They too want what everybody has in rich countries such as France: freedom! Liberté! Tunisia is a country where an individual such as Mohamed Bouazizi, who set himself on fire in a desperate act of protest, can become a symbol of resistance against the status quo. He and they are a phoenix that will rise from the ashes.”

As Yunus and I were looking at Youtube videos of the events unfolding in Tunisia his niece Lobna, who lives there, called him. Lobna is a young undergraduate student. She studies French and Yunus is very proud that the girls in his family can educate themselves more than in the past. “Now we are independent!” she said enthusiastically. It was hard not to hear how happy and emotional she was. Yunus showed me a picture of her as a teenager, holding an electric guitar. “Young people like rap music, but to me it sounds awkward. Times are changing and they should create new words and a new language. They should not wait for their elders. Thank God for the Internet! Thanks to the new social media, the dictator cannot hope to control everything, for example these new forms of music. For the first time, I really feel proud to be a Tunisian. Of course it is terrible that people have already been killed, but unfortunately freedom is not free. I’m not saying this to justify their deaths for a greater cause. It’s just an unfortunate truism that needs to be learned again and again. Today, I am so happy that these young people have the courage to resist the dictator. Today, I feel as if my dignity as a person has been restored.”

Yunus even opened a bottle of champagne for us to drink and celebrate the resistance in Tunisia. In his enthusiasm he couldn’t help reading a verse from the Qur’an (16: 67): “And from the fruits of the palm trees and grapevines you take intoxicant and good provision. Indeed in that is a sign for a people who reason.”