Egypt, and the post-Islamist middle east

By Guest contributor(s)Tuesday 8 February 2011 No Comments 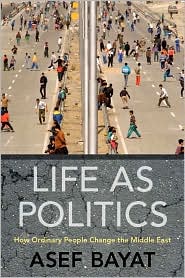 For years, western political elites and their local allies have charged the Arab peoples with political apathy and lethargy. The argument that Arabs are uninterested in seeking to wrest greater democratic freedoms from their authoritarian rulers always rested on shaky foundations. But now that millions of Egyptians, following the Tunisians’ example, have proved it wrong by mobilising against power, the sceptical ground has adjusted: toward the murmured fear that Egypt’s uprising would develop into an “Islamist revolution” along the lines – demagogic, violent, intransigent, expansionist, anti-western – of that of Iran in 1979.

The idea of an “Islamic revolution in Egypt” is voiced by four sources. The first is the Hosni Mubarak regime, in the attempt to dissuade its western allies from supporting the uprising. The second is Binyamin Netanyahu’s Israel and its allies in the United States and Europe, which wish to maintain the autocratic regime more or less intact by keeping such players as Omar Suleiman (the new vice-president and former intelligence chief) in power after Mubarak. The third is Iran’s Islamist hardliners, who are making a desperate effort to downplay the democratic thrust of the Egyptian revolution and present it as Islamic and Iran-inspired one. The fourth is a section of Egypt’s own citizens who express genuine concerns about a possible new Islamic revolution in the heart of the Arab world.

It is true that there are some similarities between today’s Egyptian uprising and the Iranian revolution of 1979. They share the quality of being nationwide revolutions in which people from different walks of life – religious, secular, leftist, men and women, middle classes, working classes – participated. Both movements aimed at removing western-backed autocratic regimes; both sought to establish democratic governments that would ensure national and individual dignity, social justice, and political liberties.

But there are also fundamental differences. In ideological terms, the Iranian revolution was a nationalist, third-worldist, and anti-imperialist movement, which took a strong stance against the US government for its continued support of the Shah (whom the US had reinstated via a CIA-engineered coup in 1953 against the secular-democratic government of Mohammad Mosaddeq).

In addition, the Iranian revolution – unlike the Egyptian upheaval of 2011 – was led by a religious figure, Ayatollah Khomeini, backed by an elaborate Shi’a clerical hierarchy and religious institutions. So, once the Shah had fled, the Islamist hardliners and the new revolutionary organisations combined – the former using religious institutions (mosques, madrasas, and shrines), the latter mobilising support while marginalising liberals, democrats, and other non-conformist – in a final push to establish velayat-t faqih (the rule of the supreme jurist), i.e. a semi-theocratic state. The Islamic revolution then ushered a new era of Islamism which was to dominate the middle east and Muslim world for the next two decades.

But today’s Egyptian uprising is also different. It is neither nationalist, anti-imperialist ,nor third-worldist. The largely civil, peaceful, and jubilant mood of the protesters (until the pro-Mubarak thugs triggered a vicious spate of violence on 2 February) and their demands are more reminiscent of the democratic revolutions of east-central Europe in 1989. In Egypt, there have been no chants against foreigners, westerners, or Americans.

Moreover, it is significant that the uprising is not guided by any single organisation, ideology, or personality – let alone an Islamic figurehead. Rather, this monumental upheaval is composed of different political and civil organisations with diverse religious, secular, and political affiliations, and a collective “leadership”. I am not aware of any religious slogans in the street rallies; on the contrary, at least one chant, sung by the crowd in Cairo’s Tahrir Square on 28 January 2011, projects a very different meaning – “our revolution is civil; neither violent, nor religious” (al-Thowratna Madaniyya, la Sayfiyya, la Diniyya).

Islamic organisations such as the Muslim Brotherhood are present in the movement, though they make up only one segment of its very broad constituencies. But still there is little resemblance between Egyptian political Islam and that of Iran’s Islamist rulers. Egypt’s Muslim Brotherhood, the largest and most organised Islamic opposition, is not leading the uprising. The Brothers were even ambivalent in participating in the street demonstrations in the early days, largely for fear of state reprisals. In strategic terms, the Brothers have refrained from confrontation with the state and not resorted to violence during the three decades of the Hosni Mubarak era.

Moreover, in deciding eventually to take part in the current uprising they made it clear that they did not wish to participate in any post-Mubarak administration. Unlike the Iranian Islamists in 1979, the Muslim Brotherhood has not tried to appropriate the movement nor even give it a religious colouring. Instead, they have joined (as they did during the Kefaya mobilisations of the mid-decade) a coalition of various opposition groups consisting of political currents with variegated (nationalist, secular, leftist, and civil) orientations.

The Muslim Brotherhood’s disinterest in governmental power in a possible post-Mubarak administration seems genuine, given that in free and fair elections they would be able to gain substantial votes. In political terms, the Brothers may appear to be somewhat similar to Jordan’s Ikhwan or Lebanon’s Hizbollah, though with probably smaller support. But ideologically, Egypt’s Muslim Brothers remain very different from these groups (and, for that matter, Iran’s Islamists).

In fact, the Brothers are in the throes of an ideological transformation. An internal debate involving discord between the old guard and the “young” leadership has engulfed the movement in recent years. Indeed, its ability and desire to enter Egypt’s political life has intensified the ddiscussion about what the Muslim Brotherhood ultimately wants to achieve.

While the older faction remains in an ideological quandary – at times repeating the ambiguous and anachronistic dictum “Islam is the solution” – the “young” elements (represented by such figures as Essam al-Erian and Abdel Moneim Abou el-Fotouh) view Turkey’s ruling Adalet ve Kalkinma Partisi (Justice & Development Party / AKP) as their favoured model of Islamic governance. This embrace of a modern concept of democracy is a radical departure from the group’s adherence in the early 1990s to the Qur’anic concept of shura, a vague conception of authoritarian but just rule subject to the principle of consultation.

The shift in Egypt’s religious politics goes beyond the Muslim Brothers. Al-Gama‘a al-Islamiyya, the Islamist group that inflicted atrocious violence on officials, Copts, and foreign tourists in the 1980s and 1990s in pursuit of an Islamic state in Egypt, underwent a significant change by the late 1990s; it laid down its arms, abandoned its violence and radical Islamism, and opted to work as a political party to pursue peaceful da‘wa (proselytising) within Egypt’s legal framework (though the government refused to give the group a permit).

Even before the transformation of al-Gama‘a al-Islamiyya, the Hizb-ul-Wasat had defected from the ranks of the Muslim Brotherhood to pursue its own very different trajectory. Al-Wasat now privileges modern democracy over the Islamic shura, embraces pluralism in religion, welcomes gender mixing, supports women’s prominent public roles, and ideological diversity. It’s not merely that (Christian) Copts are admitted to the party; a Christian, Rafiq Habib, serves as the group’s key ideologue.

Indeed, there are indications that the entire region is experiencing a shift in religious politics. In Tunisia following the revolt which overthrew the regime of Zine El Abidine Ben-Ali, the largest Islamic group is al-Nahda, represented by the ex-leftist Rashed al-Ghannouchi. But al-Nahda is not an Islamist party – that is, its aim is not to seize power and to establish an Islamic state; rather, it wishes to nurture pious Muslims within a democratic polity. Rashed al-Ghannouchi has categorically rejected the Islamic khalifa (caliphate) in favour of parliamentary democracy, and his al-Nahda is committed to social justice, multiparty democracy, and religious pluralism.

The model of “Islamic governance” that Tunisia’s al-Nahda, the “young” Egyptian Muslim Brothers, and Iran’s reformist and other groups project is the AKP in Turkey, which has governed that country since November 2002. This Islamic party has – amid much and continuing political controversy – implemented important reforms that have had an overall democratising effect.

It has (for example) abolished the death penalty, ended army-dominated security courts, removed curbs on free speech, brought the military budget under civilian control, authorised Kurdish-language broadcasting, and established workable relations with both the west and the rest of the Muslim world. Recep Tayyip Erdogan, Turkey’s prime minister and the leader of the AKP, is now one of the most popular leaders in the Muslim-majority middle east.

This is not to downplay the limitations of these Islamic organisations’ stance in the areas of individual rights, religious pluralism, and democratic practice. Yet the legitimacy crisis that Islamism is experiencing on account of its neglect and violations of people’s democratic rights is a signal of an emerging new era characterised by the search for a different kind of religious polity: one which both wishes to promote pious sensibilities in society and takes democracy seriously.

In this incipient post-Islamist middle east, the prevailing popular movements assume a post-national, post-ideological, civil, and democratic character. Iran’s green movement, the Tunisian revolution, and the Egyptian uprising represent the popular movements of these post-Islamist times. They strive to achieve social justice, dignity, and a form of democratic governance that can protect citizens’ fundamental rights.

So: what is there to fear from these historic social revolutions? They are too important to leave judgment of their character and legitimacy to the likes of Hosni Mubarak and Binyamin Netanyahu; that would be a betrayal of common sense and political expediency, even an act of moral bankruptcy. A people on the move and hungry for freedom deserve better.