Lawrence of Arabia: a rejuvenated legend

By Hassouna MansouriFriday 6 January 2012 No Comments 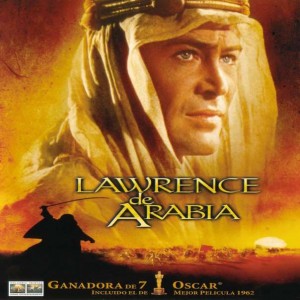 What an idea to broadcast a film like Lawrence of Arabia (David Lean, UK, 1962) the first days of 2012. The fifty-year-old film has indeed more than a similarity between the biography of the British officer who got involved in the hostilities opposing the Arabs and the Turks during a key episode of World War I on the eastern front and the current events going on in the region for one year already. Broadcasting the film right now seems to be a bad joke or an unhappy thought trying to make a link between the intervention of NATO in Libya a few months ago and the role played by a young British Lieutenant in the Arab uprising against the Turkish invaders at the beginning of the last century.

It is much too easy to find a parallel between the Arab Spring in 2011 as an uprising (Hirak) against dictators and the Arab Revolt (1916-1918) against a foreign invader. Nicolas Sakozy, David Cameron and Bernard Henry Levy can never be compared to the legendary Thomas Edward Lawrence (1888-1935). First of all because the latter was not a leader and didn’t act according to international law. His action, even though it was in the frame of British Army plans, was not what the generals really wanted. Acting according to his personal convictions condemns the hole hegemonic dispositive of colonialism one century ago and neo-imperialism in our times.

Let’s go back to the historical context. At the end of WWI the Turks, allies of the Germans, where heading south across the Arabian Sahara in the region of Sham (now Syria, Jordan, Palestine) in the direction of the Suez Canal. On their way they had to get rid of all the recalcitrant Arab tribes. The Arabs, lead by Prince Faysal, defended their lands and went into what was called the Arab Revolt. The British Military Intelligence Department in Cairo, willing to prevent this big advantage to the enemy, sent T. E. Lawrence, a specialist in Arab nationalist movements in the Turkish provinces, to negotiate coalition with the “Bedouins”.

What he did was more than what his superiors expected and mainly what they never wanted: he unified the Arab Tribes against their common enemy. What the film says is that, starting with helping the Arabs in their fight against the Turks, Lawrence went on to defend their rights against any hegemony; that is even against the British policy of colonisation in the region. But this has gone too far.

The big difference between T.E. Lawrence and those who now intervene in the so-called “Arab Spring” is that he was a poet while they are only politicians serving neo-capitalism. Lawrence was sent to negotiate the coalition. Meanwhile he fell in love with the desert and the land. He got the faith that it has to belong neither to the Turks nor to the British but to itself. He acted not in the name of his loyalty as a British officer to the crown, but in the name of what he felt and believed the right thing to do: fight colonialism and hegemony. To the question of Prince Faysal : Are you not loyal to the crown? He answers: To the crown and to other things. 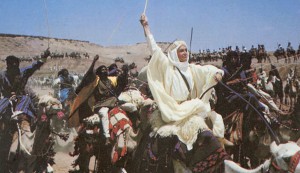 Already, like every Englishman working in the British Empire at Carchemish (in present Iraq), he learned how to motivate Arab peasants and villagers digging archaeological sites with no help from military discipline or colonial authority. That’s why once he believed in this right for anybody to be in possession of his own land, he had to follow his belief without any concession. After the war, in 1919, he went to the conference of Paris with the duty to defend the cause of Arab independence. But this is not in the film, and also probably not what the TV channel by broadcasting it wants to say.

Lawrence of Arabia was not a warrior, unlike those of our times: a gun machine. He was a poet whose love of a land inspired the fight for its freedom. His physiognomy is not of someone of action. This was the impression he inspired in his superiors. But when he crossed the desert of Nefudh (between Jordan and Saudi Arabia currently) to liberate Akaba from the Turkish coloniser, he understood that such a land with its heat and its sand, cannot belong to a man of his own provenance. Then he saw The Truth, like a mystic revelation: the injustice of a man occupying another man’s land. He was revealed to himself as a human being while he was nothing else but a screw in a huge machine called colonisation.

One more difference again between Lawrence’s action and the intervention in Libya, and probably in Syria, and the one of the British Army in the Arab Revolt, is the ideal that the intervention is supposed to defend. The British Imperial Army acted in the name of the apparent reason of the protection of Arab tribes against the Turkish invasion. NATO acted in Libya under the legal coverage of the UN resolution whose aim was to protect the civilians of Ben Ghazi against Gaddafi’s mercenaries. Both of these actions didn’t follow the literal meaning of the mission. They had other agendas behind the apparent ones.

But for Lawrence Loyalty has no sense when it is in contradiction with the Truth. Like Dostoievski’s Idiot, a fanatic of truth who denounces hypocrisy, he stuck to the literal meaning of words and didn’t make any difference between the Turkish hegemony and the British. When it comes to fight an injustice it doesn’t matter who is behind it. If the Turkish domination of the region was bad, the one of the British Empire was also bad. And if `Gaddafi, Ben Ali, Mubarak’ were corrupted dictators, those whom NATO is planning to appoint will not be less corrupt. The mission of all these pawns is always the same: serve the big beast of capital.

Hassouna Mansouri is film critic and researcher in Cultural Stides focusing on Otherness and Hybridiy.