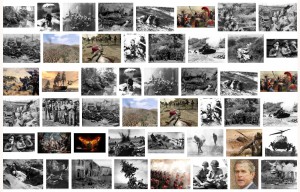 We’re a country at war, right? So let’s talk about war films, you and I. It’s a troubling genre, because it’s defined by the depiction of wholesale man-made catastrophe, which involves both vast human waste and intense cinematic excitement. Obviously, these two factors are in tension with each other, to say the least–a matter of the gravest ethical trauma crashing into pure entertainment spectacle.

Begin with D.W. Griffith’s The Birth of a Nation (1915). Whether you were a Union stalwart or a slavery-mourning rebel in the early 20th century, the Civil War had been a holocaust for your side. All the same, the battle scenes in Griffith’s film are awesomely thrilling, and the film may well have been seen by more people in its years of theatrical life than any film since. Jump ahead to Steven Spielberg’s Saving Private Ryan (1998) – no one quite forgets the electric horror of the opening Normandy sequence, which even the film’s detractors still applaud as bravura filmmaking and hypnotic.

However conflicted the war film might be, the genre has always resonated with the gravitas of fear and sacrifice. As it should. Even the gung-ho propaganda films the United States and virtually every other industrialized nation produced during World War II possessed elements of ruefulness and a sense of moral tragedy. Start counting the genre’s greatest entries – from King Vidor’s The Big Parade (1925) to All Quiet on the Western Front (1930), Anthony Mann’s Men in War (1957), the scalding movies of the Japanese New Wave, the bitter satires and documentaries about the Vietnam era, Terrence Malick’s The Thin Red Line (1998) and so on – and you’re quickly saturated with outrage. In other words, war films are almost by definition anti-war films, if not in their overt political agenda, then in their subtext and human experience.

Lately, however, “war films” – movies about full-on military combat, assisted by CGI effects that crank the experience up into rampaging mayhem – are of a different breed. They have been largely since 9/11. War movies are now fantasies, in terms of both their content and the degree to which they encourage adolescent America to suckle on its own childish ideas about war, heroism, killing and death. Coming soon to a theater near you are Battleship, G.I. Joe: Retaliation, the semi-satirical Iron Sky (Nazis attacking from the moon) and World War Z (global combat against zombies).

In the last decade, the most visually whole-hog of war epics include Battle: Los Angeles, Troy, 300, Captain America: The First Avenger, The Lord of the Rings, the Narnia films, the Transformers films, and the series’ various imitators. Between them enough hard-drive amperage has been expended to keep New York City lit for a year. But more to the point, they are visions of war detached from reality. Mention should be made of a few recent anomalies: Act of Valor (effectively a feature-length recruitment ad produced with help from the U.S. Navy), Red Tails (Lucasfilm’s cartoonish depiction of the Tuskegee Airmen) and Steven Spielberg’s War Horse, the less said about which the better.

War is no longer something to be very anti- about. Being involved in endless low-grade wars that don’t impact our daily lives, we seem to have acclimated to it as a form of entertainment we can either savor or ignore. Predictably, the popular films that entail warfare are now massive and operatic celebrations of armed conflict and military power. The contexts in which the chaos takes place–robot battles, spaceship invasions, ancient armies–appear to have been purposefully chosen for the absence of suffering and moral dilemma. The new movies have taken the lucrative lesson of first-person-shooter video games (like the popular Call of Duty) to heart: War sells if it’s a simulacra, a game, a ridiculous spectacle. In effect, the commercial entertainment industry mimics and manifests the Wolfowitz/Cheney program of open-ended, low-impact, profitable nonstop war all on its own.

We are the cogs in the machinery, and our role as citizens and movie watchers, for more than 10 years now, has been to shop, watch and be mindlessly beguiled. The actual battles in West Asia may as well involve alien robots. What matters is that war, real or cinematic, not ruin a perfectly decent Saturday evening.

Michael Atkinson has written or edited many books, including Exile Cinema: Filmmakers at Work Beyond Hollywood (2008) and the mystery novels Hemingway Deadlights (2009) and Hemingway Cutthroat (2010).