How the Arab Spring is about to be aborted

By Hassouna MansouriSaturday 14 July 2012 No Comments 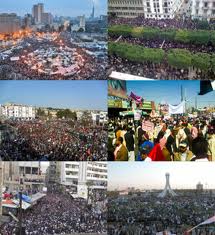 When the “Arab Spring” started, a wind of hope shook the whole region of the so-called Arab World. A lot of us started to believe that it was possible that it would reach all the countries of this area. Undeniably, it did it, in one way or another. There is without doubt a change but it doesn’t adhere to the same logic, nor does it follow the same schema. What happened in Tunisia and in Egypt cannot be reproduced in Algeria. The Libyan model is far less relevant in Syria. Something has happened, but we are not yet able to understand it properly, to measure its true impact and even less, to reduce it to a simple mechanism, as many media simplistically would like to do. Misinformation can make the crisis theses societies are facing deeper and worse.

”The issue here is not to put the devil on trial, but to show how risky it is to pretend being able to analyse events whilst they are still taking place. It is also unethical to adopt a political strategy to millions of people whom we don’t- or we don’t want to- see, but whom we use as an apparent argument for hidden purposes. ”

Certainly, there is a big gap between the reality in which these people were living and their dreams. There is also a big gap between historical facts and the conceptualisation of events. That means that our way of thinking about history is inevitably changing. The analysis of events is quite contemporaneous to them. We are forced to revise our thoughts almost every hour.  Some philosophers even suggested some theories of the so-called post-colonialism and post-islamism. How can we be objective when there is new data every day? It is uncertain whether everybody is aware of this dilemma.

The way history is generally described is very selective. As we are in a time where everything is for sale, people look lazily and only at what sells. Some, the less dishonest, might look to the future and say that the process is still going on, and for some of them there still hope. But we think much less about how the process was prepared. But when we look at how the process was slowly and silently initiated and how it is now continuing behind the facade of the so-called democratization and what looks like- but is not- a change, we hear the same masses of the wretches on the earth grumbling. The world of media is so influenced by the velocity of information that the ideas seem to be so blind to the facts, but in fact the risk of them passing by the reality is obviously imminent.

The majority of literature produced since the events began in North Africa in the beginning of 2011 is trapped. Because the media are hunting only for sensation, they deal only with the emergent part of the iceberg. The mainstream media and the official reports are mostly contributing to the misinformation of the public. They look at the debates about political process and focus on discussions involving only the elite and the political classes but they don’t show any interest in how things are really going on for those who initiated the process; the lower classes, the peasants and the labourers in the countryside.The media are selling an illusion of a change whilst the reality is heading in another direction.

The same geo-political agenda has been continuing for decennia like a merciless crushing machine. The pawns have changed but the program is the same: a process of impoverishment of millions of people. Yesterday’s opposition has taken over power. Has this changed anything for the simple citizen? Will it change anything in the future? It is time is for a deep perplexity once you get closer to the people, those who don’t count, those who are talked about in international meetings and financial negotiations, but who in reality are hardly considered.

The issue here is not to put the devil on trial, but to show how risky it is to pretend being able to analyse events whilst they are still taking place. It is also unethical to adopt a political strategy to millions of people whom we don’t- or we don’t want to- see, but whom we use as an apparent argument for hidden purposes.

Right after the fall of the regimes in Egypt and in Tunisia more than one year ago, the biggest fear of the liberals was to see their revolution stolen or confiscated in the name of democracy. Thanks to elections held more in the spirit of the technically correct process, it is now a fact that the revolutions in Tunisia, Egypt, Libya, Syria, etc, have been confiscated by certain forces serving a certain agenda in the region. The most obvious case is Libya. The explicit intervention of the Western World combined with the complicity of the rich and powerful countries of the Gulf, led to the chaotic situation that we now witness. The other countries where a so-called change is going on are only variations on the same theme: a dictatorship was forced to step down and a retrograde auto/theocracy has been “democratically” established.

Ben Ali and Mubarak have been dismissed. Everybody knows that the problem is not that of one person but of a system. The worse thing is that the new regimes, according to pernicious agreements, are having to deal with the old networks which have a well-established stranglehold on their societies. The new legally elected government and parliament are running Egypt in coordination with the army. The latter has always been the real decision maker in the country. The Islamist run coalition in power in Tunisia is accused of dealing with the network of the former sole party and its vicious circles of profiteers. In Yemen, the intervention of Saudi Arabia put an end to the people’s uprising and the former dictator Ali Abdullah Salah offered an escape route, after having done the same with Ben Ali. Those who took over in all these countries affected by the Arab Spring have an obvious allegiance to Qatar and Saudi Arabia.

The downstream involvement of foreign forces worked well in the countries where the uprisings started spontaneously. It could not the same in Syria. Things, even if they could have been comparable to other countries, went very differently there because of the premature and upstream intervention of foreigners. Not only does the social and political configuration in Syria not fit with the way things went in Tunisia and Egypt for example, but the foreign pressure also had a counter effect and pushed a certain part of the people to gather around the regime, thus creating a counter effect. Bashar El-Assad can still stand and fully profit from the society. Some are radically opposed to the regime and seek its end whatever the price is. Some others are supporting and trying to protect their interests and privileges. Between these two categories, there is a large part that doubts. This is the chance for the regime to survive.
\
The situation in Algeria is quite similar. The uprisings of the eighties didn’t lead to changes to the regime because it was too politicised from the beginning. The chaos came after an election won by the Islamists and therefore led to the downfall of the party in power. More than twenty years later, the 2012 democratic election, shows how the regime learned from that first destabilizing attempt and managed to take back the hold on the country. This time, while traditional parties in other countries were defeated, the National Liberation Front (FLN) won the overwhelming majority of seats together with its ally party the National Rally for Democracy (220 and 68 out of 462), while the islamist coalition (three parties 48 seats) was only the third biggest party.

In Syria as well as in Algeria the international pressure, whether it is explicit like in the first case or less explicit like it is in the second one, helped to put the discrediting of the regimes into perspective. In addition to the mistrust towards foreign intervention, people still remember how every change in the region is followed by chaos. No one single country until now can be regarded as a model of positive change: the instability on all levels in Iraq, the economic and political impasse in Tunisia and in Egypt, the discord and the disunity in Libya… While in Tunisia and in Egypt, elections brought Islamists to power, in Algeria, the ruling party is easily the big winner of the election. It can continue running the country with full legitimacy. Bashar El-Assad is stronger than ever after the failure of the international pressure led by Qatar and the Arab League to get rid of him.

At the end of the day the situation of the Arab societies after a fake promising wind of change is only becoming worse. In countries like Tunisia and Egypt, where the regime changed, things are continuing in the same way with new politicians dealing with the same influential networks. In other countries, such as Syria and Algeria, the regimes are surviving despite the necessity to deal with an opposition which is never strong enough to force a deep change, except perhaps in the long term.  Meanwhile, for the peasant in the Tunisian and Egyptian countryside nothing has really changed in his daily life. If anything, the situation has become worse for him: he can hardly provide for his family and animals  as food prices have risen due to speculation and smuggling. But this is another subject and it doesn’t deserve to be mentioned as long as it doesn’t sell. It has unfortunately been decided that sensation is to be found somewhere else.