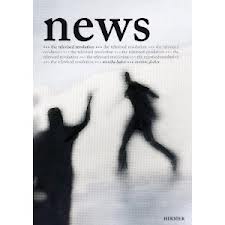 The work of artist Monika Huber is a critical appraisal of how the media reported on the Arab Spring. Some of her pieces now appear in a book published in cooperation with the Middle East reporter Susanne Fischer. A review by Björn Zimprich

One minute and 30 seconds. In modern television news formats such as “Tagesschau” or “heute”, this is the length of time allotted to a report including film. One minute and 30 seconds to explain global events to television viewers in central Europe. “One-Thirty” is the title of a work by the artist Monika Huber that provides the basis for a new book, News – The Televised Revolution.

One-Thirty – the title itself is infused with doubt: can this be long enough for an adequate elucidation of world affairs? It isn’t, of course, and this is also the theme of the book. Anyone engaging with the art book News – The Televised Revolution certainly has to set aside more than one minute and 30 seconds to do so.

But the book does not confront the reader with trite criticism of the media. It is instead more of a coherent collage of 53 images by the artist Monika Huber and a selection of texts by the Middle East reporter Susanne Fischer, in addition to further contributions by bloggers and activists from various Arab nations.

The book analyses media reporting on the rebellions and civil wars that have taken place in the Arab world since January 2011, which are subsumed under the collective term “Arab Spring”. Huber’s central hypothesis is that media reports on this series of events became interchangeable. Whether those events were taking place in Sana’a, Daraa, Cairo or Tripoli, symbols, people and actions merged in the eye of the observer in the West, making exact attribution difficult. Huber’s work imitates this postulated process. She began by photographing images from television news programmes and selecting particular excerpts of the image. She then printed these onto cartridge paper and painted over them, before detaching and erasing other fragments of the image and photographing the final product again.

Silhouetted outlines of the revolution

The images are the antithesis of the pictorial relaying of facts. They lay no claim whatsoever to knowledge, documentation and facts. Instead of the razor-sharp focus of high-performance cameras, the contours are blurred. Rather than pointing the viewer to something concrete, they lead somewhere vague.

News – The Televised Revolution does not, however, leave the reader stranded, but sets texts against the images. These are just as fragmented and disintegrated as Huber’s pictures, but nevertheless appear much more distinct.

Entertaining and condensed, the texts lead the reader through the rebellions’ various settings via Tunisia, the Syrian city of Daraa, to Damascus and then to Lebanon, where Lebanese national Raed Rafei describes her perception of the Egyptian uprising. Interestingly, we encounter individuals who, in a similar way to people in Europe, have “only” experienced the “revolutions” on their television screens. After all, like the Arab Spring, the Arab world is not a homogenous entity.

The texts introduce readers to real people, personalities of the revolution such as Lilia Alibi, who was Minister for Women in the Tunisian interim government, during which time she attempted to listen to everyone’s concerns.

Loss of faith in images

There are only 192 words on the death of the peaceful Damascene activist Ghiyath Matar, but they are more moving than the three full-page photos on the previous pages. And this is exactly the effect that News – The Televised Revolution is striving to achieve. While the images degrade readers into quizzical and somewhat lost observers, only the narration can help them to participate in what is happening. The events described in the text therefore seem more credible than the image. Perhaps this new development was prompted by reporting on the Arab Spring.

After all, viewers and those working in the media are increasingly less inclined to believe the pictures coming out of crisis-torn regions, now that every last viewer is aware of the fact that images are used as a political tool. Fischer says that this has an especially negative impact on what are known as “citizen journalists” from Syria. Although they may risk life and limb to upload a flood of images and videos of demonstrations onto the web and out into the world, these contributions are not regarded as verifiable pieces of information. Media agencies place far more faith in the accounts filed by Western journalists, although these reporters also – whether in Libya or Syria – allow themselves to be transported to the front by rebel fighters, thereby adopting their perspective.

These journalists, embedded within rebel armies, strongly resemble those so heavily criticised during the Iraq war. But Fischer ascertains that “Unlike the Iraq war, where advocates and opponents of the US invasion provide different interpretations of events, at least in the case of the Arab revolutions, Western journalists are almost all united on the side of the demonstrators.” In this respect, dispensing with the “fable of the objective journalist” would appear to be long overdue.

News – The Televised Revolution is therefore also a plea to place less trust in television pictures and to perhaps lend an ear now and again to the bloggers and reporters writing directly from affected regions. The book provides a good introduction to this.

Translated from the German by Nina Coon