By Guest contributor(s)Thursday 20 June 2013 No Comments 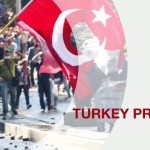 We landed at Atatürk International early last Friday with the impression from American media that Turkey was falling apart. But much of what we experienced this past weekend in Istanbul contradicted that narrative. We were left wondering whether the political situation is really a “crisis,” and, if so, what kind it was. We set out to talk to Turks beyond the media filter, trying to find out how they viewed things.

From the airport our cab made it to the Eyüp Sultan Mosque—also popularly called Abu Ayyub Ansari’s mosque after one of the Prophet Muhammad’s companions who’s buried beside it—just at the beginning of the call to prayer. When Haroon first visited it 21 years ago, hardly a soul was to be found. When Wajahat first visited 16 years back, there were only a couple of women in hijab, or headscarf. But on that morning, hundreds, including many veiled women, showed up over an hour before the congregational services, on a weekday no less, to hear recitations of the Qur’an and collectively pray. Times change and so does Turkey.

Gezi Park, in Taksim Square, is the epicenter of the recent protests. A plan to bulldoze the park inspired spontaneous demonstrations against the government for numerous grievances, including Prime Minster Erdogan’s alleged abuse of power, his regime’s arrests of journalists, his  “Islamist” agenda, and his push for a new constitution that will concentrate power in an expanded presidency. But on Friday night we marched up Istiklal Street, which leads to Gezi Park, to see Man of Steel—America’s latest superhero blockbuster—and saw a different picture.

Sure, there was plenty of graffiti and a few protestors in Guy Fawkes masks. But there was also the typical array of tourists, Wajahat was solicited several times to attend Turkish clubs that play Eurotrash techno music, and vendors engaged in theatrics enticing us to buy traditional Turkish ice cream. In other words, the usual. Where was the crisis?  Where were the police?  How could it be that just blocks from Gezi Park, clubs were full, karaoke bars overflowed, and tourists thronged at cafes and restaurants?

Over the next day, we spoke to folks in Fatih and Eyüp, more religious and conservative neighborhoods. The story was far more nuanced than the simplistic struggle of radical secularists against authoritarian Islamists. These practicing Muslims said that Erdogan had simply gone too far. Turkey’s a Muslim country, they said, but also a democracy.  They complained, for example, that the government’s potential peace agreement with the Kurds was long overdue. They showed sympathy for protesters and concern about Erdogan’s drift towards authoritarianism.

“Most politicians are corrupted by either money or power,” said a religious Turk, “Erdogan’s drug is power.” A cab driver told us: “Only God and Muhammad are perfect. Erdogan wants to be a Sultan.” That was the most succinct case for Islam and democracy we’d ever heard.

Naturally we had to check out the protests.  The taxicab dropped us off near Taksim, closed off by police barricades. Riot police were out in force, including plain-clothes policemen strategically placed in the crowds. But protesters still gathered in clumps, testing boundaries—we sought them out, as well as locals who lived and worked in the area.

The protesters were mostly young, wearing bandanas, gas masks, goggles and carrying water bottles.  Hardly “terrorists,” as Egemen Bagis, Turkey’s EU representative, described them: “[The police] will intervene against anybody who tries to enter Taksim Square, [treating them] as a terrorist.”

They were frustrated, angry, and defiant—Kemalists mostly, perhaps minority representatives of the fading order.  When asked why they were protesting, they passionately issued a litany of reasons: “For freedom, for freedom! The Prime Minister is a dictator. He is intolerant. He is divisive; he uses ‘us vs. them,’ ‘secular vs. religious’ language. He is corrupt and commits human rights abuses.”

“We don’t recognize Turkey anymore,” another protestor continued. “Erdogan’s a dictator.” A crowd formed around us, and one of the elder gentlemen called Erdogan—in English—“an Islamofascist.” For a few, “this isn’t our country anymore.” When asked why Erdogan inspired so much support, they alleged, “people who support Erdogan are benefitting from the government; the government created its own cult, local media is silenced and we rely on international media to tell the truth.”

Over a decade of AKP rule, and the country seemed to be slipping from the Kemalists’ grasp. Wajahat recalled what an AKP elected official told him a few months ago: “The greatest problem in Turkey right now is the lack of political opposition.”

Not everyone, however, was pleased with the budding opposition. A middle-aged Kurd called the protesters “losers,” who were “making trouble for nothing.” “Why should I support the protest?” he asked in disgust. “Thousands of Kurds have died and now they’re protesting over trees?” he said, contrasting the government’s decades-long suppression of Kurdish identity and rights with the planned destruction of Taksim’s Gezi Park.

Boldness and curiosity enticed us to venture with the protesters towards one of the checkpoints closing off the road to Taksim.  Quickly, we realized this was an act of reckless stupidity; both of us got caught in the teargas crossfire.

This isn’t a Turkish ‘Arab Spring.’

“Pop! Pop! Pop!” Three tear gas canisters landed around us and we tried to run away as fast as possible from the enveloping smoke. It was like having the world’s spiciest South Asian achar smeared in your eyes and poured into your lungs. More and more police moved in, showing no tolerance for the protesters: Prime Minister Erdogan was in town for a party rally and Taksim Square had to be cleared of “terrorists.”

The same Kurdish fellow who had condemned the protesters earlier clapped sarcastically as they spilled out of the side streets and shouted: “Are you happy? Are you happy?” A shopkeeper warned, “If the police don’t beat these bastards up, I’ll beat the crap out of them.” We asked him why. “They’re destroying the city.  Ruining our business.” This seemed to be a common complaint.

Most of Istanbul wasn’t on lockdown, but as we traveled through other parts of the city we felt tension in the air.  The ruling AKP, or Justice and Development Party, had called a rally—and hundreds of thousands showed up. While Erdogan has been criticized for his response to the protests—the most serious threat to his domination of Turkish politics—he clearly knew how to play counterattack.

However spontaneous the uprisings, Erdogan seemed to be in charge. He’d decided this would be played out in the most partisan way. “Erdogan is either a political genius or the luckiest son of a bitch ever,” remarked a Turkish expatriate on Erdogan’s ability to turn misfortune into opportunity.  He’d been losing support among religious Turks, as we’d already heard, but now he could rally his base.

Erdogan comes out of a long tradition of religious and conservative Turks struggling against the strictures of a secular Kemalist dictatorship. In Sunday’s speech, Erdogan reminded his supporters that the day was the anniversary of former Prime Minister Adnan Menderes’ decision to rollback one of Atatürk’s most controversial, undemocratic “reforms”—forcing the Arabic call to prayer to be offered in Turkish. Menderes, by the way, was executed. The audience got the point.

Erdogan bellowed “Allahu Akbar” several times and the crowd followed. Then Erdogan asked all his supporters to fly the Turkish flag in solidarity thereby marrying nationalism, loyalty, Islam and the AKP as the new, legitimate face of Turkey.

Later that day, a Turkish doctor called out to us in Urdu. He’d worked in Pakistan, and invited us over to his table for almonds, cashews and conversation. He was convinced that the protesters represented fifteen percent of his country, but not just his countrymen. “Russia and Iran are interfering in Turkish affairs,” he explained, “because of our position on Syria.”  There were even Syrian rebel flags among Turkish and Palestinian banners at the AKP rally.

Sitting in a posh Istanbul neighborhood late that night, we met Turkish businessmen who made clear their opinion of the protesters. “Girls in miniskirts don’t have to leave the country to study,” one pointed out, rejecting the Kemalist position that the country was slipping from their grasp—while also describing how Turkish women who wore headscarves were discriminated against for decades by state institutions.

We asked about the international media’s portrayal of Turkey, which has frequently tried to frame the conflict as existential, even a continuation of the Arab Spring.  “Western media can think whatever the fuck they want,” one business man told us while dining in Istanbul’s priciest steakhouse.  “They [AKP] are gonna’ win the next election with 70 percent of the vote.”  (That would be much more than they’ve received before.)

Haroon, who works from Dubai, has seen this dynamic play out there and elsewhere: the declining relevance of the West to political, social and cultural calculations. Maybe Erdogan didn’t screw up with his fierce reaction to the protests. Maybe he knew full well how international media portrayals could and couldn’t affect Turkey and his long-term political project.

Most Turks are not paralyzed by fear that their country might combust overnight.  This isn’t a Turkish “Arab Spring.” But there’s apprehension in the air, and while Erdogan’s partisan response to organic protests might be politically savvy, it could be strategically dangerous and divisive. He’s right that opposition parties have exploited the protests and many Turks are clearly frustrated with the violence and support a law and order platform. But if Erdogan allows the frustrations of a minority to become a story about dictatorship versus democracy, he seems unlikely to move Turkey forward.

Our conversations left us spent and exhausted at a hookah café—no alcohol on the menu—designed to appeal to Turkey’s nouveau riche. The place was packed. The headlines alleging a battle between “Islam” vs. the “West” seemed to have bypassed most Turks, as stylish hijabi women in heels smoked sheesha while checking Facebook on smart phones. Next to them, or even at the same table, women wearing miniskirts did the same. This scene is quite common for anyone who has actually ever visited Muslim majority countries.

The world is witnessing and tweeting a new chapter in Turkey’s road to deeper democracy. Atatürk posters still adorn many walls. His golden bust remains at the Turkish Parliament, overseeing an evolving and mostly successful experiment with democracy and Islamism. But the appeal of Kemalism has clearly faded, and Turks are more and more comfortable with their religious and cultural identity. So the question and fear remains: whether Erdogan will replace Atatürk’s legacy with a pluralistic democracy or a new bust in his own image?

The woman is yelling out that her windows are closed but the gas still penetrates in her house, she begs them not to throw anymore, they have sick people in the house with asthma and children and the police keep shooting! What is this if not state terrorism!:
https://www.facebook.com/photo.php?v=120204841523643

The evidence that police threw tear gas inside of the hotel!:
http://www.youtube.com/watch?v=gSaZPK8Inco

yesterday, before the cops attacked the park:

https://www.facebook.com/photo.php?v=487421801336307&set=vb.180754725401037&type=2&theater
Wajahat Ali is lead author of the investigative report Fear Inc.: The Roots of the Islamophobia Network in America. His first play, The Domestic Crusaders, was published by McSweeney’s.

Haroon Moghul is a fellow at the New America Foundation and Fordham Law School, where he focuses on national security and emerging geopolitical trends. A doctoral candidate at Columbia University, he is Senior Correspondent for Religion Dispatches and author of The Order of Light.