By Hamid DabashiTuesday 23 July 2013 No Comments 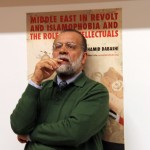 “Because Syria is no longer Syria. It is a nuthouse,” this is Francesca Borri writing for Columbia Journalism Review – the rest of what she writes explains why:

There is the Italian guy who was unemployed and joined al-Qaeda, and whose mom is hunting for him around Aleppo to give him a good beating; there is the Japanese tourist who is on the frontlines, because he says he needs two weeks of “thrills”; the Swedish law-school graduate who came to collect evidence of war crimes; the American musicians with bin Laden-style beards who insist this helps them blend in, even though they are blonde and six-feet, five-inches tall. (They brought malaria drugs, even if there’s no malaria here, and want to deliver them while playing violin.) There are the various officers of the various UN agencies who, when you tell them you know of a child with leishmaniasis (a disease spread by the bite of a sand fly) and could they help his parents get him to Turkey for treatment, say they can’t because it is but a single child, and they only deal with “childhood” as a whole.

Antisthenes ( 445-365 BC) is believed once to have said to Plato, regarding the notion of Platonic forms, “A horse I see, but ‘horseness’ I do not see”. If like those UN officers you cannot see the childhood in that individual Syrian child, then we all have a problem far worse than merely philosophical.

Carnage under the radar

The tragi-comedy that Francesca Borri describes is a signal to the continued carnage that has dismantled Syria as a functioning nation-state, the bloodiest wound on the body of the Arab revolutions remapping world history from one end to another. There might be all sorts of nuts roaming Syria in search of a high dose of adrenalin they otherwise lack in their boring and banal lives, but what is redrafting the fate of a nation is something far more critical.

As the world attention is rightly drawn to Egypt, the carnage in Syria has gone under the radar. This is all but natural – at a time when attention spans are limited not just by the frequency but also by the rapidity of headlines, in and around the Muslim world, in the rest of Asia and Africa, in Europe and the Americas. Getting lost in the thicket of the woods might also be the best way to see the bigger picture and the terrains of history unfolding.

What is happening in Syria, however, is perhaps even more critical than what is happening in Egypt – for in Egypt we have a democratic uprising having reached its own logical conclusions and unfolds dialectically towards newer horizons, but in Syria, the retrograde forces of the old world are putting a stiff resistance and muddying the water and clouding our vision.

What is happening in Syria?

The ruling regime is slaughtering its own citizens without the slightest hesitation to stay in power, the peaceful opposition has now yielded to militant and armed gangs of one sort or another, who seem to be far more hostile to each other than to toppling the regime.

“Competing rebel factions in Syria,” reports the New York Times , “are increasingly attacking each other in a series of killings, kidnappings and beheadings, undermining the already struggling effort to topple President Bashar al-Assad. The open hostilities could no longer be contained . . . when a Western-aligned group, the Free Syrian Army, demanded that a Qaeda-linked rebel faction, the Islamic State of Iraq and Al Sham, turn over the suspected killers of a prominent commander who was shot dead…Commanders with the Free Syrian Army warned that the broader movement against Mr. Assad was being threatened by the conflict between itself and the Islamic State.”

What we have here is first the aggressive degeneration of a non-violent civil disobedience demanding civil liberties into armed uprising, fuelled by Saudi Arabia and other Persian Gulf potentates, and then the metastasis of that militarisation into competing factions – which for American media is colour-coded as  “Western-aligned group, the Free Syrian Army,” and “Qaeda-linked rebel faction, the Islamic State of Iraq and Al Sham”.

So far as pro-Israeli American news outlets are concerned, the world is divided between “the West” an “anti-West” camps, and much of what is happening in Syria is read in those terms: “Syrian rebels have a new source of weapons and cash from inside Kuwait,” report Fox News, “and their benefactors in the oil-rich state are sending the aid to the most militant and anti-West factions involved in the fight to topple Bashar al-Assad. The role of Saudi and Qatari governments and individuals in the funding and arming of Islamist fighters in Syria has been well known since the civil war began more than two years ago. But now, guns and money are flowing from private sources and Salafist-controlled NGOs based in Kuwait, and they are going to rebel factions aligned with Al Qaeda.”

The American media-led labelling of these factions – “pro-West,” “Al-Qaeda-linked,” etc. – are all fine and dandy for the fast-food culture of instant consumption and easy digestion. But the far more critical vantage point is from the perspective of the Syrian civilian life and liberty, for parents and children, civil servants and labourers, men, women, and students, whose daily lives are shattered, and forced into refugee camps from Lebanon to Jordan, awaiting the return of that initial levelling ground where the citizens of a future republic will define the terms of their democratic future. In the making of that democratic future, neither being “pro-West” or “Al-Qaeda-linked” has any meaning or place.

BBC is not any better in its reading of the scene, dividing the battlefield of the opposition in terms of “Islamist and moderates”.  Reporting the murder of a senior rebel commander in Syria by rebels from a rival group BBC reports, “Kamal Hamami, of the Free Syrian Army’s (FSA) Supreme Military Council, was meeting members of the rival group “to discuss battle plans. An FSA spokesman said he was told by the Islamic State of Iraq and the Levant that they had killed Mr Hamami. The killing is part of an escalating struggle within the armed uprising between moderates and Islamists.”

“Moderate” here means friendly and palatable to the thing they call “the West,” and “lslamist” means hostile to it, though they might be fighting Bashar al-Assad too. But the question is who is arming those bad lslamists – other than the chief “Western ally” Saudi Arabia and its Persian Gulf clique?

It is precisely this seeming paradox that has some observers writing for the New York Times complaining of the disproportionate power that countries like Saudi Arabia and Qatar are exercising over both Syria and Egypt: “little Saudi Arabia and tiny Qatar are only able to wield such outsize influence in Syria and Egypt today because they have the field virtually to themselves.” What to do? “The West’s failure to set a clear policy in Egypt and Syria has let the Gulf sheikhs set one for us. Is that really the way we want the outcome of the Arab Spring to be decided? Now that’s a question even a 10-year old could answer on his own.”

In other words, in no uncertain terms the US and its allies, the same old “West”, ought to intervene even more aggressively and reign in not only the fighting factions in Syria but also they supporters in the Gulf area, to micromanage the Arab Spring even more minutely.

The heat of the moment

The more foreign intervention, the bloodier the uprising has become.  Jadaliyya has prepared a very useful “Month-by-Month Summary of Developments in Syria” – which is a critical signpost of how the democratic uprising in Syria began entirely peacefully and then was systematically militarised, first and foremost by Bashar al-Assad’s own brutal crackdown on peaceful demonstrations and subsequently by the aggressive militarisation of the opposition by regional and global powers. This assessment is necessary only to the degree that it clearly demonstrates how the rise of the Arab Spring in Syria has turned it into the crucible of the emerging horizons of the future of the Arab and Muslim world.

The drama of Egypt is today overshadowing Syria, but Syria will remain the crucible of the future of Arab revolutions – every force and every ferocity brought to bear on the body politic of a nation dismantled under the pressure. Silenced are now the overwhelming majority of Syrians themselves – ordinary people waiting their turn, beyond sectarian divisions, beyond the vicious cycle of the ruling regime and its militant nemesis.

There are no blueprints for these Arab revolutions. No one knows for sure where they are headed. Militant lslamists, outflanked Wahhabis, outdated Salafis, combative Shias, petrodollar arrogance, bewildered Zionism, Russian and Chinese opportunism, and above all the Yankee Doodle Dandy imperialism of Obama administration are all in the crucible boiling to affect the future.

But nations from Morocco to Afghanistan and from Turkey to Yemen have crossed a psychological barrier and reached the point of no return, a clear consciousness has dawned upon the horizon of history and all these retrograde forces are in one way or another waging a losing battle against each other and against themselves – their heated transmutation the fuel of history as it delivers itself to a vastly different posterity.

As a potent political category, “the people” has never been a more pertinent force, and people’s public self-consciousness never a more critical factor in outlasting all these feeble treacheries. In the midst of all the carnage remain the Syrian people themselves, those peaceful protestors who are the silent majority that might now be quiet in the midst of the violence, but will be heard again (in the form of labour unions, women’s rights organisations, student assembles, and any other form of voluntary association) once these brutish conquerors come down off their horses and Humvees to rule.

There and then they will see that a cartoon of Ali Ferzat, a documentary of the late Omar Amiralay , a film by Mohammad Malas or Usama Muhammad, a poem of Adonis or Salim Barakat, or a fiction of Khaled Khalifa or Samar Yazbek has enriched the moral imagination of a nation far from being ruled by the combined banalities of these forces now vying for power.

Hamid Dabashi is Hagop Kevorkian Professor of Iranian Studies and Comparative Literature at Columbia University in New York.  He is the author of Arab Spring: The End of Postcolonialism (2012)