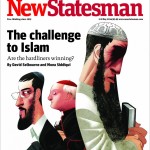 The British Muslim academic Mona Siddiqui writes about the “Arabisation” of Islam and changing attitudes to Muslims in the west.

If you were to assess much of the current coverage of Anglicanism, Roman Catholicism and Islam, you could be forgiven for thinking that the three are defined respectively through the issues of gay clergy, child sex abuse and violence. The talk of homosexuality and child sex abuse, however, can be understood as expressing institutional and social concern; they are divisive and damaging to the churches and their congregations and leave victims, but by no means are they a threat to world peace. Furthermore, although both Protestant and Catholic Christianity are growing predominantly in the global south, they are perceived as western religions. Much of the language about Christianity still makes sense to Europeans; it is familiar territory even if some of the thinking and traditions are contested in the paradigm of debates about human rights.

By contrast, Islam has gradually come to western consciousness as a religion of another world, essentialised, archaic, its own European significance largely absent from any modern understanding of European history. Many are unaware of its complex histories of empires, civilisations and intellectual life. Rather, its presence in the west has been felt through uncomfortable socio-ethical concepts that modernity finds baffling – sharia, jihad, forced marriages, honour killings, and so on.

All kinds of socio-ethical issues are lumped together irrespective of country, culture or context, because the words “Islam” and “Muslim” become the common denominator. Islam isn’t the only religion facing internal conflict but it is widely seen as the only faith marked by conflict alone. Millions of Muslims struggle to show that their Islam is open, just and generous, compatible with all the liberal freedoms the west holds dear, but this is not headline stuff because, let’s face it, these sentiments just aren’t that interesting.

In many ways the Muslim presence in the west didn’t mean much until the beginning of the new millennium. Before then it was embedded within the migration story of multiculturalism. We didn’t think much about multiculturalism because most people growing up in the 1970s and 1980s didn’t realise they were part of any political experiment. Issues around the significant and uncomfortable visibility of Islam began not with the arrival of the first generation of Muslims from south Asia but with the distinct wearing of the headscarf (hijab) on European streets from the 1980s onwards. Some recognised early on that this rising trend would force a different and more narrow kind of discourse about Muslim societies, where piety and modesty would be judged largely by clothing alone. Any thinking person knows that what women wear matters in all societies, but for Muslim women, clothing began to symbolise far more than individual piety.

The discussions about veiling in Europe are now immersed in complex ideals of freedom, femininity and faith. Irrespective of the diverse motives behind the gradual “Arabisation” of Islam in all walks of life, the wearing of the hijab and the niqab, perhaps more than anything else, has had the unfortunate effect of defining Muslim otherness in the west.

For many years, “multiculturalism” was less about tolerating difference and more about ignoring it. But all that changed with the emergence of what is now called radical Islam. This is an Islam that uses religious texts to preach conformity, violence and, worst of all, treachery. It is because of violence and radicalisation among certain communities that multiculturalism is seen by some as the failure of the past and the impasse of the future. Whereas 30 years ago, multiculturalism was defined through food and festivals, especially the Indian takeaway, today it is examined through the prism of terror and terror is seen in everything – from jihadist rhetoric to Muslim schools to a piece of black cloth.

So great is the association of Islam with violence today that many see the religion only as a radical ideology full of groups perpetually plotting – against their own in sectarian violence, against corrupt governments and to bring down the west. Its violence isn’t the violence of civic unrest and internal factions, but apocalyptic violence, symbolised most shockingly and dramatically in the 9/11 attacks.

The subsequent attacks – whether it be the London bombings of 7 July 2005, the Boston Marathon killings or the murder of Fusilier Lee Rigby – have confirmed in the eyes of many that not only are some Muslims a threat to peaceful coexistence, but they bear no loyalty to the country in which they were born or live. Their only loyalty is to the notion of a global Muslim brotherhood. For some, the impetus is to seek justice for those suffering in Muslim countries and to accept the high cost of taking that risk. That is why young men of school age, such as Abdullah Deghayes, leave everything to fight and be killed in civil wars such as Syria’s. Deghayes’s father called his son a martyr but that is a word that now rings pitifully hollow for many of us. The pattern is all too familiar, with so many young men lured by the wrong video and the wrong message.

Western foreign policies, geopolitics, sectarian violence and Muslim societies disenfranchised by their own corrupt governments are central to any debate about the rise of militant Islam and civil unrest across the world. We see it in south Asia, the Middle East and across Africa. Over the past decade or so, all kinds of words, from “moderate” to “extremist” and from “secular” to “fundamentalist”, have been used to assess religious sensibilities in the Islamic and western world. Although much scholarly research has explored the spread of radicalism, there is still no clear explanation why a certain kind of religious rhetoric has won the hearts and minds of many of today’s youth.

In his essay, David Selbourne warns that “the history of our age may one day be written under a caliphate’s supervision”. It is an alarming statement and one that he feels is being dangerously ignored by the liberal left. But the more important issue here is that this view is also harboured by many Muslims, much to the dismay of their co-religionists.

However, there is no single Islamist threat. There is no unified vision of implementing sharia, and the word “caliphate” plays to people’s simplistic imaginings of ritual and piety far more than it does to the complex realities of their lives. In these conflicting aspirations, the battle is among Muslims themselves; a battle for the very soul of Islam.

Selbourne paints a bleak political landscape and although many might disagree with his tone they will agree with his warnings. For me, as a Muslim, the issue is the conversations that Muslims are not having. Notwithstanding the current fears around terrorism and the power struggles in so many Muslim countries, there is a reluctance, even fear, of diverse ways of thinking and living in Islamic societies. There is also a propensity among many people in Islamic societies to undermine any kind of intellectualism, or critical inquiry about beliefs, traditions and institutions. The willingness to equate modernity with westernisation, and regard only certain cultural norms as the true expression of Islam, ensures a fear and control over people. People are either silenced or threatened.

Generosity and the spirit of intellectual inquiry, once hallmarks of Islamic civilisation, are being eclipsed by a gradual intolerance on so many levels. These are not symptoms of a yearning or a nostalgia, but a malaise that has made Islam appear a social and political anomaly in the eyes of many outside and inside the faith.

Several years ago, a senior member of the UK security services asked me: “What would you say to white, middle-class, British families who pretend to be liberal and inclusive but talk of Muslims only as a problem at their fancy dinner parties?”

I understood the question to be more about the clash of values than the threat of terrorism. I’m not sure what he expected me to say but replied that I couldn’t stop anyone from thinking and saying what they felt about the Muslim presence – but it was my duty as a British citizen to act locally and contribute to society in some small way. Home and religion were both important and the safety of one was tied to the safety of the other. Integration has become a buzzword, almost meaningless, but I know that being British shouldn’t make you feel any less Muslim. The choice between loyalty to state and loyalty to religion is false and dangerous. Yet religious extremism creates this division, destroying the possibilities of constructive relations in the community, in the nation and internationally.

For the time being at least, Muslims don’t have the luxury of sitting back and hoping all the negativity will just go away. This is the challenge for ordinary Muslims who don’t wish to be drawn in to these debates and who are tired of having to explain and reject jihadist imperialism and violence in the name of Islam. Nonetheless, there is no point in dismissing local and global events as having nothing to do with Islam.

However misguided many of us think terrorists are, to their followers they are heroes. Their propagation of an Islam v the west ideology is not only a false, but a toxic distinction, in which there are no winners. If we want to make this distinction meaningless, to show that there are voices of men, women, young and old who are speaking up for peaceful coexistence and not for an isolationist Islam, we can’t be disengaged from important conversations in public life.

The relative social and intellectual freedoms we all enjoy in the west should neverbe taken for granted. Pluralist societies flourish because of people’s commitment and civic engagement, not their indifference.

In the current climate, religious faith, especially theistic faith, is often seen as something that directs us to an intolerant past of conflict, whereas secularism grounds us in individual freedom and orients us towards a hopeful future. The debate has a simple premise, which is that a gradual secularisation of most of the western world has been realised through a conscious and enlightened distance between church and state, especially after the bloody religious wars of early-modern Europe, leading eventually to healthy, liberal democracies.

At the end of the cold war, Francis Fuku­yama’s thesis was that the liberal idea, rather than liberal practice, had become universal. Fukuyama argues that no ideology is in a position to challenge liberal democracy and that although Islam constitutes a coherent ideology, with its own code of morality and political rule, “this religion has virtually no appeal outside those areas that were culturally Islamic to begin with”. Yet, as Fuku­yama contends, we may want peaceful lives but as individuals we are mostly restless and passionate beings, in search of causes. For Fukuyama, our primordial instincts for struggle, our restlessness, are such that even if the world were full of liberal democracies people would struggle for the sake of struggle, out of boredom with peace. He contends that the struggle will be not for democracy but against peace, prosperity and democracy. We may be a long way off from a tyranny-free world but I do wonder whether part of the appeal of terrorism – the shunning of modernity for so many young Muslims – lies in that most basic of human conditions, boredom and the constant search for a new struggle.