A cartoon history of the Middle East starting in 1853

By Guest contributor(s)Thursday 12 June 2014 No Comments 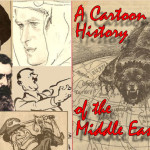 The purpose of this project was to display by way of a collection of drawings how the Anglo-American press cartooned and lampooned the chain of events within the region between 1853 to today. The Cartoonist do not draw for today. Looked back upon, we find that their art provides a time capsule of history, offering a graphic perspective of events over a given time.

The idea to mount this project came about almost by accident. Being passionately interested in politics in general, I had long developed the habit whenever I opened a newspaper, of looking immediately for the page with the cartoon. For me they captured the essence of contemporary events and helped to illustrate the crux of a matter far more than the often incomprehensible and over-written editorials. The day I cut out the first cartoon relating to a Middle Eastern event, I became an incurable cartoon ‘junkie’.

“The further backward you look the farther forward you can see.” – Winston Churchill

The National Collection of Newspaper housed at the British Library’s Newspaper archive must certainly rank as one of the world’s outstanding conservation achievements. As an institution of its kind it has no equal, either in quantity or quality. 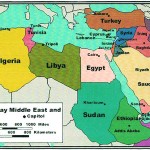