After three years of bashing Sunni opponents and lending assistance to Iran and Bashar Al-Assad’s regime in Syria, 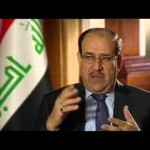 , i Prime Minister Nouri Al-Maliki’s chickens have now come home to roost. Fighters from the Islamic State in Iraq and the Levant (ISIL) have now overrun the largest Sunni cities in Iraq, Falluja, Ramadi, Mosul, and Tikrit. If statements on their websites are to be believed, ISIL is planning to go all the way to Baghdad—a bridge too far perhaps. But they certainly control the largest swath of the Sunni populated areas of Iraq. ISIL has been able to marshal local Sunni support in their sweep. Al-Maliki, by contrast, has yet to marshal a quorum in parliament to pass an emergency law to help him deal with the crisis.

In a “Letter from Iraq,” posted in these pages in early March, I warned that Al-Maliki was using the threat of ISIL as an excuse to go after his Sunni rivals in the western governorate of Anbar; that U.S. support for him would simply aid and abet his sectarian policies. Al-Maliki’s misguided policy is not a simple case of fighting terrorism: ISIL’s assaults on major Iraqi cities are part and parcel of the Syrian insurgency, Sunni Iraqis’ rebellion against Baghdad, and the wrath of Saudi Arabia and the Gulf Cooperation Council countries against Al-Maliki. For Iraq, the implications of Al-Maliki’s missteps will be far reaching, especially if the Kurds get drawn into the fight. For the region, this is likely to turn into another proxy war between Iran and Saudi Arabia.

ISIL has indeed shown great resilience, from having been down and out in Iraq a few years ago to becoming a force to be reckoned with inside Syria, and now back in Iraq in a big way. The few hundred fighters they have fielded in the current offensive, however, are not alone and, if they had been, would not have been able to dislodge the superior Iraqi security forces. Sunni tribal fighters, former (disbanded) Saddam military officers and the apathy of local residents and many in Al-Maliki’s own armed forces are all factors behind ISIL’s successes. From the early days of U.S. occupation of Iraq, Sunni tribes offered to assist against extremist groups in return for money, arms, and a promise of political enfranchisement in the “new Iraq.”

Despite early failures to connect with Sunni tribal leaders, General David Petraeus made successful inroads with important segments of the Sunni community, first as commander of the 101st Airborne Division in the Mosul area, from 2003 to 2004, instituting counter-insurgency tactics simultaneously with a “winning hearts and minds” campaign. As CENTCOM commander in 2008, Petraeus advocated that countering terrorist threats required more than just counter-terrorism forces, demanding instead political and economic measures to win over the local population and build a stable base in which extremist forces would not be welcome. Putting aside the overall evaluation of the American mission in Iraq, Al-Maliki would have certainly benefited from taking to heart the Petraeus philosophy in general, but particularly in the Sunni-majority regions of the country.

Following the assault on Mosul, the State Department condemned the violence through a spokesperson: “The United States is deeply concerned about the events that have transpired in Mosul over the last 48 hours where elements of the Islamic State of Iraq (ISIL) have taken over significant parts of the city. The situation remains extremely serious…. The United States will provide all appropriate assistance to the Government of Iraq under the Strategic Framework Agreement to help ensure that these efforts succeed.” Given the absence of U.S. troops on the ground, this stated goal can only be accomplished via an immediate resupply of Iraqi troops and the use of American drone strikes. The Sunni population of the cities under assault will no doubt perceive American re-involvement as a hostile act.

Imagine if the U.S. had left behind seven thousand or so troops in the country after the major withdrawal of troops in December 2011. The assault by ISIL would have implicated those left behind, as their presence would have been used by Islamist groups as additional grist for their recruitment mill in going on the offensive again. Someone in the Obama administration, and certainly at the Department of Defense, must be saying, “Thank God the Bilateral Security Agreement (BSA) did not pass the Iraqi parliament vote!”

Additionally, the BSA would have required American troops to assist Iraqi forces in repelling the assault on Iraqi cities. Under current circumstances, a small U.S. force dispatched to help defend Mosul would have required reinforcements, hence reintroducing the very type of involvement that President Obama sought to end. (It’s something the administration would do well to keep in mind in Afghanistan, since the BSA in that case allows the U.S. to keep up to 10,000 troops beyond 2014.)

De-Baathification, the extraction of all traces of Saddam’s Baath party from Iraq, is one of the underlying causes of today’s violence. The policy was strongly advocated by the former American friend in Iraq, Ahmed Chalabi. Sadly, the Bush administration, under the instigation and leadership of Donald Rumsfeld’s DOD, adopted this policy, much as it had adopted the invasion idea, and helped the new, predominantly Shia leadership implement Iraqi-style McCarthyism against its Sunni citizens.

I vividly remember the arguments in Baghdad, between young neocons hired by DOD and State Department Middle East experts, with the former accusing the latter of resisting the implementation of the administration’s policies in this regard. From the point of view of area experts, the policy of de-Baathification unnecessarily antagonized the entire Sunni community by making every one of them suspect, regardless of how low a position they had held during the Saddam era. Indeed, Chalabi and his friends even went after schoolteachers and journalists, taking away their jobs and sometimes throwing them in jail. The policy continues to this day, poisoning the political atmosphere and jeopardizing national reconciliation in the extreme.

One thing is clear: U.S. goals in Iraq have not been accomplished, and what accomplishments were achieved prior to the departure of troops in 2011 have by now unraveled. From the lofty nation-building goals of 2003, a constitution and a functioning parliamentary system are indeed still in place. National reconciliation, however, has lagged behind and may now be on the verge of collapsing. Economic recovery remains mired in disagreements over the export of oil policies of the central government and endemic corruption of state officials at all levels. As for security, and despite the millions spent on training and equipping Iraqi troops, the performance of the state has been deficient throughout the country.

The exception is the northern Kurdish region, where central government forces were shunned in favor of a locally grown and controlled security apparatus. Even before this latest assault on Mosul and its surroundings, Iraqi civilian deaths from sectarian strife over the past year exceeded the number killed during the height of the civil war in 2006 to 2007. Economically, politically and militarily, the Iraqi nation remains a work-in-progress, with the word progress used only idiomatically.

Where do we go from here? Dangers loom on several fronts, and the U.S. must tread lightly. First, any assault by central government forces on the cities of Mosul and Ninevah will pit the central government’s forces against local tribal militias, not just the ISIL forces. Civilian casualties are bound to be high. Second, Kurdish troops have so far avoided any confrontations with central government forces because of disagreements over border areas between them such as Kirkuk, but also because the Kurds want to avoid embroilment in sectarian fighting, which could get ugly if it turns into Kurd versus Arab fight. The U.S. should be very careful before it urges Kurdish troop involvement, opening up a whole new can of worms.

Third, Iran, already behind Al-Maliki’s policies in Anbar, quickly offered to help him in Mosul. Does Washington really want to be seen as taking sides in a struggle that could easily turn into a proxy war between the main U.S. ally in the region, Saudi Arabia, and its archrival Iran?

The best the U.S. can offer Al-Maliki is strategic advice, even at this late stage of the game, to mend his fences with Sunni and Kurdish citizens before they give up on the idea of a unified Iraq completely. Al-Maliki can make dramatic gestures in both directions, winning Sunni and Kurdish hearts and minds, or he can step aside and allow someone else, Iyad Allawi perhaps, to do it for him. On his present course, offering only to meet fire with fire, Al-Maliki has put his country on a self-destruct path not unlike the one Bashar Al-Assad has chosen before him. If that is the way Al-Maliki wants to go, Washington should make it clear that this time, he goes alone.

Nabeel Khoury is Senior Fellow for Middle East and National Security at the Chicago Council on Global Affairs. He previously served as Deputy Chief of Mission in Yemen (2004-2007), Deputy Director of the Media Outreach Centre in London (2002-2004), and Consul General in Morocco (1998-2002). In 2003, during the Iraq war, he served as State Department spokesperson at U.S. Central Command in Doha and in Baghdad.