A Islamic State (IS) ; A totalitarian, expansive and hegemonic project

By Guest contributor(s)Friday 13 February 2015 No Comments 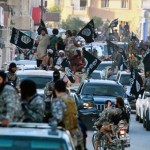 Are we underestimating the scope of Islamic State (IS) by referring to it as a “terrorist militia”? IS raises taxes, recruits soldiers, pays officials and is keeping oil wells in operation. According to Volker Perthes, it would be more accurate to call it a jihadist nation-building project

“Islamic State” is neither Islamic, nor a state, explained Barack Obama on 10 September, as he outlined his strategy for combating this organisation. The US President may well have been saying what the vast majority of Muslims are thinking. But, I’m afraid, he is not entirely correct.

“Islamic State” (IS) is not, therefore, just a “terrorist militia”. This characterisation, which has become widespread in the media, rather downplays the situation. It would be more correct to speak of a jihadist nation-building project. Jihadism denotes an extremist way of thinking in Islam. We have seen it before in al-Qaida and other, similar groups: it is an ideology that deviates from the most important Islamic schools of religious law in insisting on a war against non-believers and people of different faiths – a war unbounded by space and time – and declaring this war to be a religious duty.

IS is much more than a terrorist militia

What we are actually dealing with here is a governing organisation that currently controls around a third of Syria and Iraq. Up to eight million people live in this area, and IS carries out quasi-state-like functions there. It metes out its own justice (based on extremist notions of Islamic law), it raises taxes, recruits soldiers, produces and exports oil. It also maintains the supply to the markets and the electricity supply.

This makes “Islamic State” a totalitarian, expansive and hegemonic project. IS has declared itself to be the nation of true believers, claiming that there is only one permissible interpretation of the principles of faith. Muslims who think differently, or belong to other denominations, are declared to be infidels; people of different faiths are tolerated as long as they pay protection money.

“Islamic State’s” decision to drop the geographical suffix “in Iraq and the Levant” from its name underlines its intention to expand beyond these borders. In contrast to other nation-building projects, “Islamic State” will not seek diplomatic recognition or membership of the United Nations: it quite simply rejects the international system of nations.

When he named himself caliph, Abu Bakr al-Baghdadi explicitly asserted a claim to the loyalty of all Muslims everywhere in the world. In reality, however, he is followed only by a few smaller terrorist groups, in places like Pakistan.

Threat to the region

“Islamic State” threatens the security and welfare of people in the region. It is also threatening our European and German security interests. Any further expansion by IS would directly endanger the autonomous Kurdish region in Northern Iraq, other parts of Syria, Lebanon and Jordan. Saudi Arabia, meanwhile, is more threatened by the sympathy for IS among its own population than by a potential advance by IS fighters. If IS takes more territory, this will also unleash more, larger waves of refugees, putting even more pressure on nations like Jordan, Lebanon and Turkey than is already the case. And as long as IS can still boast successes, it will continue to recruit young jihadis from Europe, Russia and other countries, some of whom will later return to their homelands.

What is more unsettling than the sheer number of fighters that IS is able to mobilise (various security services estimate the number at between 10,000 and 30,000) is the fact that local resistance to their reign of terror has remained relatively limited. Large sections of the population are simply adjusting to the new situation – not because they agree with IS, but because they see the governments in Baghdad or Damascus as even worse and feel marginalised or oppressed by them.

It is also alarming that the alliance of Sunni states led by Saudi Arabia offers no real convincing ideological alternative: the politico-religious language of the self-proclaimed caliph and the totalitarian vision of Islam that lies behind it are not so different from what you can hear from imams at Friday prayers or from state-employed religious scholars in Saudi Arabia.

The USA, European nations and other international powers can and should support their regional partners in the fight against “Islamic State”. This includes using aerial attacks to contain IS or providing arms to partners in need, like the Kurdish regional government. Above all, however, it demands diplomatic and humanitarian efforts.

The real political and military battle must be fought by these partners themselves, if only for reasons of credibility. Long-term solutions for Iraq and Syria can only be achieved by political and not military means.

Without a genuinely inclusive government in Baghdad that gives Arab Sunnis the feeling that they have a say in the running of the country, Iraq cannot be rebuilt.

The first thing Syria needs is a ceasefire, or – to be more precise – many local ceasefires, between the regime’s troops and the moderate rebels who now find themselves fighting a war on two fronts: one against the regime and one against IS. This is the only way to prevent a further advance by IS and to gradually pave the way for a political solution that could perhaps keep the state of Syria intact. This is, amongst other things, a task for the United Nation’s new mediator for Syria.

But neither the war in Iraq nor the war in Syria can be brought to an end without an easing of the tension between Saudi Arabia and Iran: the conflict between these two regional powers further aggravates the sectarian, Sunni–Shia polarisation in the whole region and provides more and more poisonous grist to the mills of “Islamic State” and other jihadis. It is only right, therefore, for German and European diplomats to seek a settlement between Tehran and Riyadh as well.

Translated from the German by Ruth Martin