Can a Muslim be gay – or accepting of a fellow Muslim who’s gay? 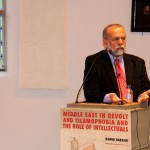 Ever since the landmark US Supreme Court decision on June 26 making same-sex marriage legal in the US, debate has emerged among Muslims worldwide about the merit of the ruling, with the obvious implication if they as Muslims approve or disapprove of a person being a gay while professing to be a Muslim.

“When the Supreme Court’s decision on Friday legalised same-sex marriages in all 50 states,” one commentator wrote jubilantly, “many American-Muslims were thrilled with the news. For these Muslims, their own religion [sic] convictions support their views on gay marriage and believe that God’s compassion trumps all.”

“But many Muslims on social media lashed out,” another cautioned, “saying ‘qiyamah’, the day of judgement, was near while the story of Lot condemning homosexuality in holy scriptures, including the Quran, is being ignored.”

At the forefront of these two extreme positions, we see a band of clean-shaven yuppie US Muslims eager to appease their White-American constituency issuing their “fatwa”, as it were, encouraging Muslims to embrace the Supreme Court decision, while most their bearded and turbaned counterparts on the opposite side of the isle issue dissenting fatwas against such reconciliations.

These two sides, self-appointed “leaders” and “celebrities”, are both out-to-lunch and have no business issuing such fatwas beyond their own singular opinion on the matter and speak for nothing and no one beyond themselves.

The decline of turbaned clerical authority among Muslims worldwide does not amount to the rise of authority among the self-styled US Muslim “celebrities” with a sleek PR agent and a Madison Avenue hairdo.

What we need is a sustained course of community-wide debates among all Muslims, and not just on the Internet. Preferably, we would see these discussions within major Muslim countries such as Turkey, Iran, Pakistan, Egypt, and Malaysia.

The history of sexuality, and its radical reconfigurations from medieval to modern times, need to enter the debates. Leading scholars of this field such as Joseph Massad have radically contested the manner in which what he terms “gay international” has imperially dominated the variety of homoerotic domains in Arab and Muslim history.

Over the last few decades, a number of groundbreaking works of scholarship have richly enhanced our understanding of the history of sexuality among Muslims.

Samar Habib’s edited two volumes Islam and Homosexuality (2009) and Khaled El-Rouayheb’s Before Homosexuality in the Arab-Islamic World, 1500-1800 (2009) are examples of such groundbreaking work.
Scott Siraj al-Haqq Kugle, Homosexuality in Islam: Critical Reflection on Gay, Lesbian, and Transgender Muslims (2010) is another critical example, plus the work of other scholars such as Kecia Ali, Serena Tolino and Sara Omar.

Ludovic-Mohamed Zahed wrote a crucial autobiography, The Koran and the Flesh/Le Coran et la chair (2012), Jerry Wright’s Homoeroticism in Classical Arabic Literature, and Helie and Hoodfar’s Sexuality in Muslim Contexts have expanded our historical understanding of the issue, while Joseph Massad’s Desiring Arabs (2007) took the whole discourse of homosexuality radically to task.

The current level of public discussion by Muslims, and non-Muslims alike, remains scandalously ignorant of such works of scholarship, and quickly cuts to a passage in the Quran and interpreting it in one way or another declares Islam to be one thing or precisely it’s opposite.

In the US, gay marriage has become legal not because the Bible says it’s ok. It certainly does not. Christian fundamentalist like Mike Huckabee et al. are up in arms (some literally) against this law.

In the US, same sex marriage became legal by virtue of generations of civil rights struggles, and ultimately as an act of civil liberty. This cannot just be created for the Muslim world by fiat among Muslims by one Imam or another celebrity issuing their respective fatwas.

The legalisation of same-sex marriage in the United States will do very little to diminish the deep-rooted homophobia in this country, as indeed the Emancipation Proclamation of 1863 did not entirely end racism; or Roe v Wade of 1973 end patriarchy, machismo, and misogyny; or Brown v Board of Education of 1954 ended school segregation, which has continued apace along class lines to this day.

The US, and the world at large, still have a long way to go to end such acts of bigotry, racism, and sexism.

Muslims at large are part and parcel of this world. Before a similar law might pass one day in Egypt, Turkey, Iran, or Pakistan, etc., Muslims too need to be integral to that global struggle for civil liberties, as they continue their conversations to learn to respect and honour their fellow human beings without wondering what their gender or sexual orientation might be.

Same sex marriage has been legal in more than a dozen countries, such as Mexico and South Africa, with no such fanfare. The recent legalisation in the US has the unintended consequence of adding it to the arsenal of claims that US foreign policy is promoting its imperial interests.

The most significant aspect of this Supreme Court decision is that it places the US on democratically levelled ground with other countries that have already had similar legislation in place. It can then use them all as examples to encourage Muslims at large to participate in open, honest, and informed discussions articulating and safeguarding their civil liberties across the board – which includes, but isn’t limited to, gay rights and the possibility of the acceptance of same-sex marriage within Muslim communities.