Hit enter to search or ESC to close
Middle EastWest

An open letter from Alain Badiou to Jean-Luc Nancy

By Guest contributor(s)Tuesday 5 April 2011 No Comments 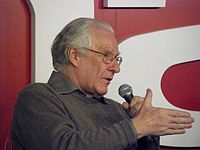 Yes, dear Jean-Luc, the position you adopt in favour of ‘Western’ intervention in Libya was indeed a sorry surprise for me.

Didn’t you notice right from the start the palpable difference between what is happening in Libya and what is happening elsewhere? How in both Tunisia and Egypt we really did see massive popular gatherings, whereas in Libya there is nothing of the kind? An Arabist friend of mind has concentrated in the last few weeks on translating the placards, banners, posters and flags that were such a feature of the Tunisian and Egyptian demonstrations: he couldn’t find a single example of these in Libya, not even in Benghazi. One very striking fact about the Libyan ‘rebels’, which I’m surprised you didn’t note, is that you don’t see a single woman, whereas in Tunisia and Egypt women are very visible. Didn’t you know that the French and British secret services have been organising the fall of Gaddafi since last autumn? Aren’t you amazed that, in contrast to all the other Arab uprisings, weapons of unknown origin emerged in Libya? That bands of young people immediately began firing volleys in the air, something inconceivable elsewhere? Weren’t you struck by the emergence of a supposed ‘revolutionary council’ led by a former accomplice of Gaddafi, whereas nowhere else was there any question of the masses who had risen up appointing some people as a replacement government?

Don’t you realise how all these details, and many more, chime with the fact that here, and nowhere else, the great powers were called in to support? That such riffraff as Sarkozy and Cameron, whose aims are transparently sordid, were applauded and worshipped—and you suddenly give them support. Isn’t it self-evident that Libya provided an entry for these powers, in a situation that elsewhere totally escaped their control? And that their aim, completely clear and completely classic, was to transform a revolution into a war, by putting the people out of the running and making way for arms and armies—for the resources that these powers monopolise? This process is going on before your eyes each day, and you approve it? Don’t you see how after the terror from the air, heavy weapons are going to be supplied on the ground, along with instructors, armoured vehicles, strategists, advisers and blue helmets, and in this way the reconquest (hopefully a fitful one) of the Arab world by the despotism of capital and its state servants will recommence?

How can you of all people fall into this trap? How can you accept any kind of ‘rescue’ mission being entrusted to those very people for whom the old situation was the good one, and who absolutely want to get back into the game, by forcible means, from motivations of oil and hegemony? Can you simply accept the ‘humanitarian’ umbrella, the obscene blackmailing in the name of victims? But our armies kill more people in more countries than the local boss Gaddafi is capable of doing in his. What is this trust suddenly extended to the major butchers of contemporary humanity, to those in charge of the mutilated world that we are familiar with? Do you believe, can you believe, that they represent ‘civilisation’, that their monstrous armies can be armies of justice? I am stupefied, I must confess. I ask myself what good is philosophy if it is not immediately the radical critique of this kind of unreflecting opinion, moulded by the propaganda of regimes such as our own, which popular uprisings in regions strategic for them have put on the defensive, and which are seeking their revenge.

You say in your text that it will ‘later’ be up to ‘us’ (but who is this ‘us’, if today it includes Sarkozy, Bernard-Henri Lévy, our bombers and their supporters?) to make sure that oil and arms deals, and the like, don’t make their return. Why ‘later’? It is now that we have to make sure, by stopping the great powers as much as we can from interfering in the political processes under way in the Arab world. By doing all that is possible so that these powers, fortunately out of the picture for a number of weeks, cannot reintroduce—under the damaged name of ‘democracy’ and the moral and humanitarian pretexts that have been used ever since the first colonial conquests—oil and other deals, which are quite simply the only deals that these powers and their states are interested in.

Dear Jean-Luc, in circumstances of this kind it makes no sense for you or me to go with the grain of the Western consensus that says: ‘we absolutely have to remain in charge of everything happening’. We have to make a stand against the grain, and demonstrate that the real target of Western bombers and soldiers is in no way the wretched Gaddafi, a former client of those who are now getting rid of him as someone in the way of their higher interests. For the target of the bombers is definitely the popular uprising in Egypt and the revolution in Tunisia, it is their unexpected and intolerable character, their political autonomy, in a word: their independence. To oppose the destructive interventions of the powers means supporting the political independence and the future of these uprisings and revolutions. This is something we can do, and it is an unconditional imperative.

“What the Arab peoples signify to us” by Jean-Luc Nancy

The Arab peoples are signifying to us that resistance and revolt are with us once again, and that history is moving beyond History. They are doing it, as is appropriate, with all the fortune and misfortune that it involves. At the very least they have sent an irreversible signal whose effects we can expect to see across Africa and in the odious perpetuation of the drama on Canaan’s ancient land. In one of the places where we least expected this revolt to occur, a leader of the gang (officially, of the State) crushes it, ready to liquidate whoever necessary of his supposed people.

Meanwhile, other States strike at their own rebels quite forcefully, sometimes with the help of a powerful Arab neighbour. Benghazi insurgents are asking for help: this is not simple, entailing clear risks, both practical and political. Political responsibility means weighing up and dealing with such circumstances. Is this the time to invoke in pell-mell fashion the collateral risks and suspicion of (more or less) hidden interests, the principles of non-interference and the heavy guilt of a “West” that may, one wonders, include Libya itself, or Saudi Arabia or Syria, not to mention China and Russia?

It is fine for the beautiful souls of the left and the sophisticated operators on the right to sigh or protest; whether in European or in Arab countries: one must know which world we are in. We are no longer just simply in the world of Western arrogance, self-confidence and imperialism. Oh! It is not that the poor old “West” has cleaned up its act: it is simply in the process of melting in the fusion that begets another world, without sunrise or sunset, a world where it is day and night everywhere at the same time and where it is necessary to reinvent the act of living together and, before all else, the act of living itself.

So, yes, it is necessary to keep a close eye on the strikes that are aimed at undermining the vile assassin of the people; sure, it is necessary to strike—him, of course, not the people. We can no longer, with one hand, invoke the sovereignty that, with the other hand, we empty of substance and legitimacy through all the interconnections—the best and worst—of the globalised world [monde mondialisé]. It is up to the people in question and to all others, including us, to ensure then that the oil, financial, and arms dealing game that installed and maintained this puppet (among many others) in power does not start over. It is the responsibility of the peoples, yes: and it is also of course to us, the peoples of Europe or America, that this is addressed.

It is a delicate task. But at stake is what we want to live and how we want to live it, with an acuteness that we are not accustomed to. That is what the Arab peoples are also signifying to us.

Visit Libération: to read the original article in French, published 28 March 2011. This translation by Gilbert Leung.