You will harm regardless your good feelings

By Hassouna MansouriWednesday 18 January 2012 No Comments 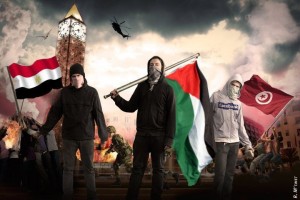 The culture of the so-called MENA (Middle East and North Africa) region has never been so visible in Europe like it was during this year, 2011. Of course the reason is now admitted as nothing else but the “Arab Spring”. All festivals are programming films from Tunisia, Egypt, and Syria… All cultural organizations are organizing debates, symposiums and exhibitions. However, this phenomenon looks somehow ambiguous. That the world focuses on the culture of a region is certainly worthwhile whatever the reason is.  But the fact that this same region is presented that way shows also how it was unfairly neglected. Very often there is a lot of arrogance in the behaviour of those who, without any authentic interest neither in culture nor in the region, are using its tragedy by walking on its corpses. Even worse, most of the time, these scavengers contribute to a historical misreading of events.

In a time of cultural budget cuts, a cultural program dealing with the Arab spring is a very relevant argument for fundraisers. Not only the policy of a lot of funds is to stick to the actuality, but it is also a fact that there is a real public expectation and curiosity awakend by the medias brainwashing during weeks and months. Use such a context to say the half of the truth or even to mislead and misinform the public is a moral and historical responsibility, if not an intellectual crime. A lot of people, even among activists,  seem not to be really aware of it.
The work of a filmmaker who fought for each one of his films and paid of his blood nerves and even his life the price of his art cannot be presented to the public just for fun. If you don’t give a work of art the respect it deserves, you punish the artist for the second time. Syrian filmmakers like Omar Amiralay,  Osama Mohammed or Mohammed Malas who were recently presented in the Netherlands are among the best filmmakers in the region. They suffered twice for their work. Their regime denied them any freedom and any decent material conditions to express their artistic talents. To the first frustration we should add that they were ignored outside their country, except perhaps for some circles of elites and cinephiles in the Maghreb or for some marginal European film venues.

To show these kinds of films now in Europe as a very special event, whether we are aware of it or not, is of some perversity unless we show them the respect they deserve. A film needs to be considered first as a work of art not as a pretext to talk about something else. A twenty year old film deserves to be screened in a film museum or in a retrospective in a film event. You don’t screen Battleship Potemkin (Sergeï Eisenstein, 1925) because you want to talk about the recent problematic elections in Russia. You don’t screen Scarface (Howard Hawks, 1932) because you want to analyze how Wall Street is pushing the worlds’ economy to collapse. Tunisian, Egyptian and Syrian filmmakers were denied their freedom under the dictatorship and their artistic status by the world’s mainstream. To show them now after months of uprisings and thousands of direct victims, not to mention those indirect, is unfair and inappropriate. The audience expects them to talk about the actual reality of their countries. Or their films are produced in a complete different context and talk about another reality. They used to talk in place of their people, now this latter is talking by itself, so it’s completely different.

This unfairness has different layers. The film is not considered as such but as a complementary element for a discussion with a guest who has nothing to do with films, like a politician, diplomat, economist, activist and so on… Moreover when the debate is hosted by a non specialist in film, the conversation shifts to anything but the reason why the film was made. It is also confusing for the audience who is invited to a discussion with a guest about the actual sufferings of the people not about the film. The other layer is that everybody is talking about the people while the latter is once again not given the possibility to talk for itself. In a way the world goes on not listening to the right voice at the right moment. Who listened to these filmmakers when they were fighting? The people are developing other ways of talking and claiming, but these ways are not given the possibility to meet the audience. We are missing the time and the space as well. The debate is biased in many ways.

In a debate about the revolution in Tunisia and Egypt, some organizers would embellish the evening by inviting some artists from Morocco, Lebanon and Jordan. Most of the times they are based in Europe or in the US. When they come from the Netherlands it is perfect; there is a discussion about the revolution with a lot of “gezelligheid” and nobody gets bored. The audience is happy to meet a Jordanian choreographer even though he (or she) is not directly concerned by the events and never lived under the repression in Jordan and has probably never been in any of the countries where the riots take place. The only fact that he has a connection with a so-called Arab origin is enough to put him in a discussion about the revolution. Don’t be surprised then when the animator of the discussion asks him whether his art prepared the uprising in his county. He would laugh and say: “Oh! I don’t know but it is nice that you ask the question”.

These are couple a few examples of how cultural organizations in Europe are dealing with the actuality of definitely the biggest geopolitical change in contemporary history after the fall of the Soviet Union and the Berlin wall. They are perversely part of an omniscient complot against any claim of freedom in the world. Or they are not aware of this and they are then victims of a very strong manipulation. In both cases they sell free conscience to the world at a very low price. It is not because some film programs, exhibitions and debates are organized that the world can relieve its soul and feel free of the guilt for what is happening not only for a few months but since the world decided to give all powers to a beast called capitalism which is deciding for everything; not only in the southern part of the globe but everywhere. Hélas not everybody is Jean-Paul Sartre or Franz Fanon aware that the fight of the African peasant is the same as the one who called to fight neo-capitalism and occupy its symbols: Wall Street and het Beurs Plein.