Hit enter to search or ESC to close
Politics

By Guest contributor(s)Wednesday 18 April 2012 No Comments 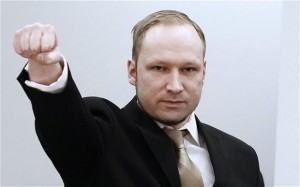 this is the picture of Anders Behring Breivik–a white, Christian, racist European mass murderer, today at a Norwegian court facing charges for his heinous crime–the picture is so vile that one is instantly inclined to turn one’s face away from it–but we must look at it: for decades Western European and North American mass media have turned the face of Arabs and Muslims into the singular insignia of terrorism and criminality–putting millions of Muslims around the globe on the defensive for the horrors perpetrated by a few–Breivik is a criminal, and his identity stops with him–he does not implicate any other white, Christian, European male. He just represents himself–just like Osama bin Laden. Stop racially profiling Arabs and Muslims!