The Journey to Tahrir: Revolution, Protest, and Social Change in Egypt

By Guest contributor(s)Tuesday 10 July 2012 No Comments 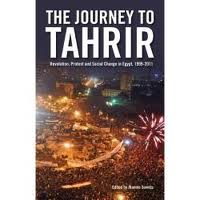 Since the overthrow of Tunisia and Egypt’s entrenched dictators, pundits and academics have scrambled to keep up with the surprising and fast-moving events across the region.  Much of the journalistic coverage gravitated towards the dramas and spectacle of the protests and the immediate concerns and checkered outcomes of these revolutionary moments.  Much ink was spilled on notions of twitter revolutions, the leaderless and youth-dominated movements, the potential for Islamist “hijacking the revolutions,” and the consequences for the US-led regional order.

Meanwhile, the bulk of the academic community studying politics in the Middle East were caught flat-footed.  In the last decade and half this scholarship was deeply invested in a paradigm that sought to explain “the lack of democratization” in the region by focusing on the vigor of the region’s authoritarian systems.  Countless books, articles, and conferences focused on authoritarian endurance, upgrading, and the subversion of seemingly liberalizing processes (e.g. how multi-party elections, were subverted by autocrats to weaken opposition and distribute patronage to supporters).  Unlike “common wisdom” that resorts to the well-trodden commentary that understands the region’s democratic deficit in culturalist and religious terms, this literature examined the structures of the state, their budgets, and the ruling parties that dominated their institutions as the principle factor in sustaining democratization.

Indeed the study of politics in the region in the last 15 years focused on elites, institutions, and explaining how the so-called third wave of democracy skipped over the Middle East and the prospects for profound political rupture, especially one that was led by non-elites, was neither likely nor impending.  In other words, classic questions and concepts in political sociology and political economy, such as class, mobilization, or public sphere, have increasingly been sidelined by political scientists working on the region.[i]  Thus, if revolutions always catch their participants and observers unawares, the case was painfully true in the case of the Arab Uprisings of 2011 and 2012.

Nevertheless, we do have exceptions.  One of these has been the coverage by the Middle East Research and Information Project (MERIP) that publishes Middle East Report.  Consistent with its 40 year founding mission, Middle East Report has sought to offer analysis that is less often considered by the media and the academy; in the last two years it has combined informed analysis of social processes to celebrate people power as well as sober political judgment to offer early warning of “half-coups.”  Teachers and their students, scholars and activists, therefore, are fortunate that Jeannie Sowers, a current member of the editorial committee and Chris Toensing, the executive director and editor of MERIP since 2000, have compiled and updated two dozen previously published essays on Egypt.[ii]  Scheduled for publication in June 2012, The Journey to Tahrir, a compilation of short and accessible essays, focuses on the important Egyptian case by avoiding the foreclosed avenues of analysis driven by the news cycle and the increasingly narrow and elite-oriented definition of democratization and dictatorship prevalent in academia.  Instead, rich empirical material derived by extensive field research and analyzed with an eye towards the political struggles to map out unforeseen connections between neoliberalism and gender relations (see Eric Denis, Chapter 19) or authoritarianism and sexuality (see Hossam Bahgat, Chapter 24).

This collection, drawing on research and writing from the turn of the millennium, allows us to appreciate the challenge of toppling a dictator buttressed by global political and economic forces, the longstanding social forces that have been incrementally challenging hierarchy and privilege, and the immense task and struggle for defining the revolution and restructuring of power relations and state efficacy.

The Journey to Tahrir does not claim that the Egyptian uprisings or their counterparts across the region were inevitable or predictable.  Instead, the collection is designed to lay bare the multiple contexts that made the struggle for creating a more decentralized, accountable, and participatory polity possible and meaningful for significant numbers of Egyptians.  The book narrates this by first clearly recounting the revolutionary moment, pregnant with potential and pitfalls, and then moves on to map out the circumstances and processes that generated grievances, organizations, alliances, subjectivities, and vulnerabilities within and beyond the regime.  An introduction by Jeannie Sowers usefully weaves in issues and events since the 18-day overthrow of Hosni Mubarak.

The first section provides a detailed account of the events and experiences of the 18 days that toppled Egypt’s 30-year president. Mona El-Ghobashy (chapter 2) and Ahmad Shokr (Chapter 3) eloquently capture the unpredictable, yet organized, nature of the movement.  Detailed analysis of slogans, poetry, media coverage, and youth clean-up crews are located in the historical, geopolitical, and political economic setting.

The remainder of the book is tasked with the challenge of situating the uprising within its social contexts.  Upon second reading and with the advantage of hindsight, the venerable themes and analysis offered by MERIP pays dividends.  In Part II, veteran academics and journalists remind readers that despite and because of the authoritarian nature of the regime, Egyptian workers and political activists have organized protests against neoliberal reforms, despotism, and Mubarak’s foreign policies.  At the time that these essays were penned, they were often treated as minor incidents and mere examples of discontent under unrelenting dictatorship, yet in the hands of these authors, these nascent organizations and limited public contestation represent social transformations and political processes with uncertain futures.

he next section broadens the spectrum of political actors and venues of protests to include opposition parties, judges, human rights organizations, Islamists of all stripes, and Christian and Muslim religious hierarchies and different class backgrounds.  The interactions and jockeying of these groups at times sustained Mubarak’s hegemony and at other moments shaped the judicial and electoral systems and religious and sectarian politics.   With hindsight the pluralism and fragmented nature of the post-2011 Egyptian electorate can be foreseen in these essays.

In the years to come, I suspect, the academic debate surrounding the exact role of economic factors in the Arab Uprisings and other global protests movements will persist.  Section IV foregrounds Egypt’s “chaotic” and “undisciplined” neoliberal economy.  The collection of essays eschews overly mechanistic arguments about class interests, intra-capitalist conflict, commodity prices, or structural adjustment.  The five chapters in this section examine how Egypt’s particular course of neoliberalism in the 1990s and 2000s generated alliances between segments of the capitalist class, state military contractors, bankers, and urban planners at the local, national, and transnational scales.  Moreover, they produced new forms of corruption, privatization of security, urban geographies, demographic patterns, and environmental degradation.  The political economy documented in this section allows readers to make sense of why so many Egyptians gravitated to the rallying cry of “work, freedom, and dignity,” but also illustrates the monumental task ahead to make meaningful inroads in addressing these demands.

The final section takes up the issue that has received media attention in the wake of the Uprisings—youth, women, and sexuality.  In the hands of these long-term observers and activists, however, these categories are neither pre-ordained categories, nor unrelated to other identities and processes.  Everyday practices such as veiling, marital choices, sexuality, and being youthful are all fraught with tensions emanating between state policy, societal patriarchy, the prevalence of Islamism in cultural field, and dislocations associated with neoliberalism.

This collection of concise, yet thoroughly readable and empirically grounded, essays elucidate the conditions that made the journey to Tahrir possible and the struggles since the fall of the despot so contentious.  The volume does not pretend to be comprehensive and key forces such as the structure of Mubarak’s security apparatus or U.S. geopolitical interests only make cameo appearances.  For a more thorough examination of the structure of Mubarak’s regime, how it organized power, and its changes and vulnerabilities over the past three decades one has to turn elsewhere.  In actual fact, The Journey to Tahrir suggests that the mass uprising targeted more than Mubarak’s circle of sycophants, the ruling NDP party, or the security apparatus.  The contexts and conflicts catalogued by these chapters represent struggles against profound historical and global forces of power and powerlessness.  While it is unclear if the Tahrir intifada will lead to liberation, whatever the outcome it is certain that, just as in this volume, MERIP will shed light on questions and topics too often unexamined.

[i] Within the discipline of sociology, the study of the Middle East is far less prevalent that in political science. Important exceptions include Asef Bayat (author of an essay in The Journey to Tahrir), Munira Charrad, Charles Kurzman, and Valentine Moghadam.

[ii] Some of the essays either updated the content or integrated material from more than one MERIP essay.  There is a plan for a second edited volume that will collect MERIP essays on the Arab Uprisings beyond Egypt.

The Journey to Tahrir: Revolution, Protest, and Social Change in Egypt, by Jeannie Sowers and Chris Toensing (eds). Verso, 2012.

Arang Keshavarzian is Associate Professor of Middle Eastern and Islamic Studies at New York University.  He is the author of Bazaar and State in Iran: the Politics of the Tehran Marketplace.  His essays on Iranian and Middle Eastern politics, urban space, and state formation have been published in a number of edited books as well as academic journals, including Politics and Society, International Journal of Middle East Studies, and Geopolitics.  Arang was a member of Middle East Report’s editorial committee from 2005 to 2011.