Will the real Martin Luther King stand up? By Zihni Özdil

By Guest contributor(s)Monday 21 January 2013 No Comments 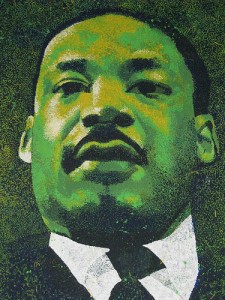 In 1983 President Ronald Reagan reluctantly, and after pressure from Congress, signed a law that made every third Monday of January a federal holiday: Martin Luther King Day. Reagan himself was opposed to the idea because ‘the jury is still out on whether King was a communist sympathizer or not.’

Had Reagan known how King’s legacy would be turned into market-friendly woolliness he surely would have signed the bill more enthusiastically.

We have all grown up with King’s 1963 ‘I have a dream’ speech. In that speech he focused on blatant segregation in southern states and called for racial harmony. It is no coincidence that precisely this speech later resonated among white liberals and, hence, made its way to the artery of institutionalized remembrance.

Jobs and Freedom
The many equally superb, yet radical, speeches King gave during his life have become footnotes in the margin of official history,  just like the other speeches that were given in Washington on that day in 1963.

The ‘I have a dream’ speech was actually part of a larger event organized by civil rights and labor activists. And ‘Jobs and Freedom’ were indeed the main themes of the march. How many of us know today that the organizers, including Martin Luther King, had formulated 10 official demands? Among these demands were:

King stood side by side with labor union leaders on that day, as he would throughout the remainder of his life. Moreover, he was one of the earliest and fiercest critics of the Vietnam War when most of the country, including many liberals, was staunchly supporting it.

Therefore, as Reagan correctly put it in 1983, King was widely condemned as a ‘communist sympathizer’ – the buzz word to demonize anyone who was challenging economic inequality. And, consequently, he was disliked by most American whites until well after his death.

In fact even King’s ‘I have a dream’ speech disturbed the Kennedy government. The FBI concluded that the speech was ‘powerful demagogy’ and that it was time to ‘mark him as the most dangerous Negro of the future in this Nation’. This resulted in an order by Robert Kennedy to expand the monitoring of King under the COINTELPRO program.

Yet, after a thorough pasteurization process, all these facts have now become forgotten history.

Pasteurization
Pasteurized milk will not upset the stomach. It will not cause any inconveniences after consumption and will thus become marketable. Martin Luther King’s legacy has similarly been pasteurized for mass consumption.

King’s many speeches on ‘radical redistribution of economic power’ or on how ‘freedom is never voluntarily given by the oppressor; it must be demanded by the oppressed’ have been discarded from official memory. Instead we are regaled with carefully selected quotes like ‘a desire to be first’ and ‘everybody can serve’. Or, even more scandalously, many fantasies on King’s ‘free-market legacy’ are being concocted and disseminated.

This extremely abridged, sanitized and corrupted version of Martin Luther King that is force-fed through educational curricula, mass media and shallow political speeches does not challenge the powerful and the wealthy. Therefore, the murky irony of a Third-World bombing, Wall Street serving, social security privatizing and union-busting Barack Obama commemorating the death of Martin Luther King remains concealed to most of us.

The real Martin Luther King was indeed a ‘communist sympathizer’.

Bio: Zihni Özdil is a social historian at Erasmus University, the Netherlands. For more information go to: www.zihniozdil.info