Hit enter to search or ESC to close
CultureUncategorized

Promethea Unbound: A Brief Note on The Patience Stone by Atiq Rahimi

By Guest contributor(s)Monday 19 August 2013 No Comments 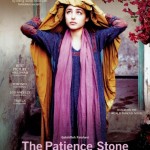 The Patience Stone (2012) by the Afghan-born, French-based director, Atiq Rahimi, is his second attempt at screening his own novels after his Earth and Ashes in 2004. Based on his novel under the same title (2008), The Patience Stone raises as its central theme female’s self-realization and emancipation. The movie commences with radio announcements repeating “republic” and “democratic,” but the artillery sounds that ensue render the broadcast ironic and betray the reality of the frontline, war-stricken community of Afghanistan, where the movie is set.

Golshifteh Farahani, the Iranian thesp alienated from her Islamic home country of Iran, leads the protagonist and offers an extended lyrical monologue which grows to be the most compelling element in the movie notwithstanding the device sounded somewhat melodramatic in the first scene. Farahani’s character, which is identified as “the woman” in the cast does not emerge – despite her religious moments – as a devoted Muslim in the course of the provocative and courageous narrative she relates of her suppressed past.

While she tends to her comatose husband (Hamid Djavdan) after the gunshot wound he has received in his neck, the situation develops into a fruitful one for the long repressed frustrations of the Oriental woman to find a vent. During the movie, the protagonist grows from a dependent female to a leading figure and ultimately to a prophetess. Farahani’s character gives voice to and substantiates her womanly desires and interests and thereby challenges religion, tradition, and particularly native patriarchy which had silenced her voice and would still subjugate her numerous faceless female peers.

On a psychological level, the heroine – with the council she would always get from her prostitute aunt – is not interested in the religious rituals which the Mullah offers for healing her husband. Rather, she is, unconsciously so, inclined to keep her husband, or what her aunt identifies by referring to Persian mythology as the patience stone, as he is, so that she can relate to him her long suppressed frustrations. Making use of the unique situation in which a formerly abusive husband is now impotent to respond or to reassert control, the protagonist divulges her frustrations which include not being heard, noticed, understood, loved, properly made love to or protected enough by the war-obsessed husband. While the woman makes a statement about her spouse, it tends to hold about all his male peers in their community: “Those who don’t know how to make love make war.”

At another point she examines his wound and addresses the unreactive, paralyzed husband as such: “You’re never in pain,” While there is a literal component to her expression, the statement, on a broader level, embodies objection to the patriarchal order in which men are never in pain as they are always in power. Nonetheless, Rahmani’s film is the reversal of the native tradition and his counter-establishment stance is demonstrated in Farahani’s spellbinding performance. In a few key scenes, the protagonist manages to keep her husband behind a veil and engage in love affair defying the tradition that seeks to impose restraints on her (and on all her peers alike) in the name of chastity and social conventions.

Also, the theme of female emancipation is enacted in minor narratives as they take place within the protagonists’ overall frame of confessions. They include her initiative of having her father’s fighting quail killed in order to avoid a forced stake-prompted marriage. She also reveals their daughters’ paternal background to her incapacitated husband who could not beget him being a sterile – albeit denying – man. As such, the film is an inverted cinematized version of The Arabian Nights. Whereas in the Arabian Nights Scheherazade had to obtain king’s permission to tell stories each night and thereby save her life, in The Patience Stone the protagonist relates her personal stories day after day – not out of fear of perishing, but – due to an unconscious drive for narration of her suppressed worries in order to achieve emotional alleviation.

Moreover, the central protagonist not only expresses her desires but also substantiates them with the stuttering young soldier (Massi Mrowat) who takes her as prostitute. The heroine soon becomes his teacher advising him how to give sexual gratification. Nonetheless, whereas mythology says the patience stone shatters once it has received one’s anguish, the inactive husband, who is identified as the patience stone in the course of the movie, does not instantly perish, but even tries to reassert his power toward the end. In a climactic scene, the three-week comatose husband partly recuperates and, having heard her wife’s audacious confessions, attempts to strangle her. Yet female agency is demonstrated at its peak at this point; the woman prophet, as Farahani’s character calls herself toward the end, takes the initiative of shattering the “stone” by killing her husband.

In this regard, the movie’s end proves highly pertinent as the young soldier visits the woman’s house and finds the protagonist in a murder scene of operatic density. He is entering through the gate while the fully shining sun as well as accompaniment of music (by Max Richter) suggest a sense of discipleship. The prophetess has shattered the stone (of tradition) and welcomes the young, conceding disciple with a victorious, seductive smile and a passionate expression.

As a consequence, coupling Middle-Eastern traditional atrocity and French inspirational sentiments, the Bohemian helmer director, Rahimi, has set expressionism, self-fulfillment and life versus war, victimization and suppression. Despite its many merits including ingenious monologue and exemplary characterization, The Patient Stone, dissenting and controversial as it is, finds less chance of circulation within conservative Muslim communities. Ultimately, although incorporation in image of the woman’s sufferings during her engagement would make the monologue more engrossing, The Patient Stone, as it is, does propose an alternative to the suppressive Afghan patriarchal order and, on a broader level, successfully promotes the Oriental female’s voice.

– ”Rasoul Aliakbari is a doctoral student in comparative literature at the University of Alberta, Canada. With publications in English and Persian literatures, Aliakbari is pursuing research interests in nationalism, ideology and colonialism as they occur in Romantic literature. His textual focus is somewhat diverse and includes North American, British as well as Middle-eastern areas. Correspondence via [email protected]“