The big deal about the Iran nuclear deal

By Hamid DabashiTuesday 26 November 2013 No Comments 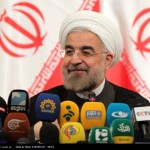 Soon after the historic deal between Iran and the so-called P5+1, the White House published the fact sheet of the interim agreement, putting its own obvious spin for domestic benefits. Meanwhile the IRNA (Islamic Republic News Agency) published its own full version, which did not differ much with the White House’s, though it did give a fuller picture of the deal. The battle of spin has started in earnest.

Above and beyond any such spin, however, are some very basic and simple features to this deal: According to a detailed analysis by The New York Times, the gist of the deal is this: “Iran retains the technology and material to produce fuel for a weapon for now, [but] the deal adds time to an Iranian nuclear “breakout”, [while] Iran will receive some financial relief, but most sanctions will remain.”

The clear victory in this deal, however we read it, belongs to the Iranian people, for a number of quite critical reasons:

The ruling regime has, however, very little to celebrate, so far as its claim to protecting Iranian national interests is concerned – for in fact this text shows its almost complete capitulation to the P5+1 – for reasons such as: “Iran has committed to halt enrichment above 5 percent”, and “Iran has committed to neutralise its stockpile of near-20 percent uranium,” and “Iran has committed to halt progress on its enrichment capacity” – and in exchange, has received nothing to show for it: “In total, the approximately $7bn in relief is a fraction of the costs that Iran will continue to incur during this first phase under the sanctions that will remain in place. The vast majority of Iran’s approximately $100bn in foreign exchange holdings are inaccessible or restricted by sanctions.”

In the clear words of one US official about this agreement: “Iran will actually be worse off at the end of this six month deal than it is today.”

This deal is a failure, as far as the ability of the ruling regime is concerned, to protect the Iranian national interests. But as far as its own survival is concerned, this deal amounts to a grand victory for it has considerably lifted the threat of war and to some extent neutralised domestic defiance, while it has kept its regional soft and hard power (of which I have already written in detail), intact.

In reaction to these facts, the ruling regime in Iran will start selling this deal as a grand victory for Iranians, which it is not; even as the Obama administration will tell the Israelis, Saudis, and the US Congress, that it has given up nothing in exchange for everything (with perfect justification); while expat warmongers will try to convince their employers they are still useful and should be gainfully employed.

Be that as it may, the clear loser in this deal is Israel. For the extraordinary commitment of Iran to transparency, which includes, but is not limited to, providing “daily access by IAEA inspectors at Natanz and Fordow” will inevitably draw attention to the only nuclear power in the region that, with astonishing colonialist arrogance of the yore, simply refuses even to admit it has nuclear warheads, let alone allow the inspections of its nuclear facilities.

Aided and abetted by the US, Israel has managed to safeguard its nuclear arsenal while putting pressure on Iran not to even come close to the possibility of developing a nuclear weapon. As far as the prospect of peace in the region is concerned, the fact that Iran will be stopped from developing any nuclear weapon is, of course, good news. But the world is now looking with even wider eyes, and even more dropped jaw, at the audacity, vulgarity, and unsurpassed white supremacist arrogance of Israel to effectively threaten the entire region with its nuclear arsenal, while remaining entirely immune to any such threat from any of its neighbours.

Israel may think that this deal with Iran will ensure its continued armed robbery of Palestine. But the fact is that the tide of public opinion has so vastly turned against the Jewish apartheid state that no amount of investment by US billionaires in the propaganda machinery of Zionism will stop people from seeing the big fat elephant in the room.

How can a sovereign nation-state like Iran be subject to such extraordinary control and surveillance of its nuclear programme while a European settler colony like Israel is exempt from any such scrutiny? The exceptionalism on which Zionists so adamantly insist, in fact works against them – it proves that they are no legitimate sovereign state – that they are what they are: a settler colony. The fact that US officials have reportedly been negotiating with Iran in secret for months before this deal, without even informing Israel, much to the chagrin of Israelis, is yet another indication that we are witness to the threshold of a much wider implication of this deal.

As Al Jazeera reported in a major feature, “Israel’s decades-long policy of deliberate ambiguity about its weapons of mass destruction (WMD) program is being challenged more than ever before, by the international community and by voices within the Israeli society.” It is not accidental that Israeli Prime Minister Benjamin Netanyahu has angrily reacted to this deal and called it a “historic mistake“.

Marwan Bishara, senior political analyst for Al Jazeera, has already noted how this deal “could lead to new unspoken Israeli alliance with the so-called moderate Sunni regimes, ie, Saudi Arabia, UAE, Jordan, Egypt, against their common nemesis, Iran” – a development that could radically alter the geopolitics of the region, in which the transnational democratic uprisings will be sought to be derailed by regional alliances.

But in the immediate aftermath of this historic development, Israel is as much a loser in this deal as the Iranian people are the winner in their legitimate demands for democratic change. In the next round of elections, or on any other social occasions they deem appropriate, they can begin to ask the ruling regime the wisdom of prolonging this deal until such time that they considerably forfeit Iranian national sovereignty just to protect their own regime; or by what logic they are willing to sit down and strike a deal with the “Great Satan”, and yet leave scores of peaceful Iranian dissidents in prison, or deny Iranians their right to a free press, or to peaceful assemblies, or independent labour unions, or women’s rights, or student assemblies.

The fact is that the fate of foundational democratic changes in Iran must be, once and for all, severed from their vicious abuse by the warmongers in and outside Iran – and a clear demarcation outlined that at one and the same time enables domestic democratic institutions and discredit those who wish to abuse these legitimate causes for their illegitimate designs. An apartheid settler colony built on the broken but defiant back of Palestinians, and a Saudi rule, light years distant from any notion of democracy, could not possibly be the source of inspiration for any democratic cause anywhere in the world.

Hamid Dabashi is Hagop Kevorkian Professor of Iranian Studies and Comparative Literature at Columbia University in New York, and the author of Iran: A People Interrupted (2008).