They say that before you drown a calm fills you. A subtle euphoria loosens your last grip on life. 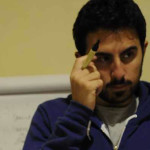 Today, 27 people sit in jail. Alaa Abd El Fattah, Mohamed Al-Rifae, Mohamed Hosny, Taimour, Mamdouh Gamal, Abdalla Zekky, Dr. Yehia and his son Mahmoud, Peter Galal, Abdelhamid, Kougy, Ahmed al-Attar, Mostafa Yousri, Wael Metwally, Ahmed Nabil, Hossam Shawky, Moka, Nubi, Salaheddine, Yassin, Hany, Bobo, Samy, Kalousha, Ahmed Abdelrahman, Ahmed Maher and Ahmed Douma. If it wasn’t for friends pushing the cop in the balaclava off my back I would have been in there with them. Why? To send a message; the message the state has been sending since February 12, 2011. It’s over. Go home. Shut up.

What we do next will define the world to come. I don’t know how we win. Not any more. I look to history and see only failure, only loss. We have never won. We have won battles, but never the war. I see the failed revolutions of 1848, the Spanish Revolution, Chile, Tehran, Oakland, Istanbul — moments of inspirational possibility. They leave a collective memory with us, a feeling, but all are gone. Maybe it is loss that we should be measuring. How to — somehow — slow the devastation that lurks.

Why am I writing this? Because devastation is upon us. Mohamed Ibrahim and the Ministry of the Interior have been unleashed. First on the Brotherhood and now on the activists who — for better or worse — launched and sustained this revolution we were once all so in love with. This revolution that gave so many of us the best part of our identities. This revolution that is drowning.

For the police, it’s about pride. The pride that’s taken such a battering since January 28. Men with guns and leather jackets have very little else to hold on to. Their lives revolve around pain and fear. The more afraid you are, the stronger they become. And you can never be afraid enough to satisfy them.

“What we do next will define the world to come. I don’t know how we win. Not any more. I look to history and see only failure, only loss. We have never won. We have won battles, but never the war. I see the failed revolutions of 1848, the Spanish Revolution, Chile, Tehran, Oakland, Istanbul — moments of inspirational possibility. They leave a collective memory with us, a feeling, but all are gone. Maybe it is loss that we should be measuring. How to — somehow — slow the devastation that lurks.”

And what’s it about for us? A future less choked with certainty? I think that’s all anyone’s ever wanted out of this.

The coming past stretches out before us. Will we accept what we see coming, or make one more stand for the unknown?
We trust to each other’s strength. Or we did. And we were strong, undefeatable, once. Now, more than ever, we must find that strength, that trust. If you ever saw hope in this revolution, if you ever gave someone a cigarette on a march, if you ever went home with ideas burning brighter than the tear gas in your lungs then now is the time to find that trust again. Don’t ask me what comes next, because I honestly don’t know. Don’t ask me how we turn street power into politics, because I wish — more than anything — that I could tell you. The two, as they are, exist in different universes. What I know is that, right now, the street is all we have. And that if the street is strong, the police are not.

On November 27 thousands of people marched around downtown and to Parliament Street. The police made transparent attempts to endorse the march, issuing a ‘permit,’ telling the media it was allowed. They don’t get to decide when we’re allowed to march. We do. But we can only make that decision when we are in the thousands.

If you’re reading this then it means you have access to the internet, you probably own a computer and you can speak English. Which means you are harder — politically — to kill. Mohamed Ibrahim and his police can kill 50 Islamists and working-class kids before breakfast and the country doesn’t seem to care. But they would care if he killed you. And he knows it. It’s a filthy system. It stinks. But if we don’t use our privilege to try and change it, then we are part of the problem.

The last four days is all you need to consider. On November 28 police fired tear gas and shotguns into Cairo University, killing Mohamed Reda. On November 28 an assault team raided Alaa Abd El Fattah’s house, beat his wife and dragged him to jail. They left him blindfolded and handcuffed on a tile floor for the whole night. On November 29 I and four members of my family sat in an office of the Cairo Security Directorate, trying to visit Alaa. Later, officers leaked secret photographs of us, taken inside the office, to a state newspaper to show that they don’t torture absolutely everyone who enters their buildings. On November 30 they attacked a protest outside Abdeen Courthouse with shotguns. On December 1, a police officer in Qalyubiyah shot dead a student who argued with him about a car crash.

The police are the cancer at the core of a rotten state. A state whose institutions all now conspire against her citizens. The unholy trinity of the ambulance service, the hospitals and the morgue; who hide the dead from parents, robbing them of even mourning. The prosecutor and the judiciary who hide away the prisoners from the lawyers and activists whose lives are spent on courthouse steps. The constitutional committee who would have you sent to a military court in a heartbeat. The media who would see the country burn. Each is as rotten as the other. Each wields their weapons against the people. But still the police go too far for some, for those who prefer to control through economics and class rather than shotguns and tear gas. The state — weak and rotten as it is — will fracture.

We too are divided. Now more than ever. We will never be as united as we were in the 18 Days. Unity is born of simplicity, and nothing is simpler than chanting “ir7al,” saying no. But tyranny is upon us again. We do not need to agree on the details or what exactly comes next. We just need to say no.

Two futures lie ahead of us: one known, one unknown.

One lit by fire, one still unseen.

One ruled by fear, one still ungoverned.

Omar Robert Hamilton is a filmmaker and a founding member of the activist media collective, Mosireen