Hit enter to search or ESC to close
DiversityPoliticsUncategorizedWorld

By Guest contributor(s)Tuesday 11 February 2014 No Comments 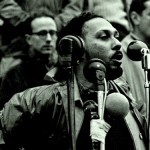 The influential sociologist, founding editor of the New Left Review and godfather of cultural studies leaves behind a powerful intellectual legacy.

In this video, from BBC Newsnight, he explains what he believed in his own words.

Jeremy Gilbert reflects on the life and work of Stuart Hall, who died today aged 82: opendemocracy.net
Institute History
2013 Sundance Film Festival
Description:
A person’s culture is something that is often described as fixed or defined and rooted in a particular region, nation, or state. Stuart Hall, one of the most preeminent intellectuals on the Left in Britain, updates this definition as he eloquently theorizes that cultural identity is fluid—always morphing and stretching toward possibility but also constantly experiencing nostalgia for a past that can never be revisited.

Filmmaker John Akomfrah uses the rich and complex mood created by Miles Davis’s trumpet to root a masterful tapestry of newly filmed material, archival imagery, excerpts from television programs, home movies, and family photographs to create this lyrical and emotionally powerful portrait of the life and philosophy of this influential theorist. Like a fine scotch, The Stuart Hall Project is smooth, complicated, and euphorically pleasing. It taps into a singular intelligence to extract the tools we need to make sense of our lives in the modern world.