Is Putin Going to Postpone the Inevitable? by Reza Parchizadeh 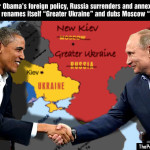 In the mid-1980s, the last leader of the Soviet Union, Mikhail Gorbachev, introduced two key terms that became the staples of his domestic policy and later turned into the defining concepts of the Soviet history during that particular era. Those terms were Glasnost and Perestroika, meaning “openness” and “restructuring” respectively; and what Gorbachev meant by them, to put it most simply, was to implement openness in the Soviet social sphere and carry out a restructuring of the communist political system. This by no means was meant to be a revolutionary act; supposedly just a move in the right direction for the maintenance of the malfunctioning system.

However, the applying of those concepts set in motion a process of emergence of an array of centrifugal, mostly nationalist, forces within the Soviet Union that had been held together through a generally coerced loyalty to the communist ideology on the one hand and the use of sheer military force on the other for more than seventy years. As a result, what ensued in the years to come was the unraveling of the Soviet Empire. As the center could no longer hold, the dependent or semi-dependent “republics” of the Soviet Union one by one declared independence. The map showing that area of the world now bore more “international” thick lines than before.

Yet, this independence remained mostly nominal, as the fledgling republics were overshadowed by the spanning wings of their Big Brother, the largest republic of them all, the Russian Federation, which had assumed the mantle of the former Soviet Union. For years, Russia’s political and economic hold on the smaller republics remained rather firm. As such, these republics remained in limbo, i.e. in a situations of half-independence. This in turn led to a protracted cold war between most of the smaller republics and Russia that continues to this day. Over the course of years, by concluding political and economic agreements with other countries and influential economic regions of the world, these smaller republics have been trying to free themselves from the Russian stranglehold.

The most recent event in that direction has definitely been Ukraine’s struggle to diminish the Russian influence by deposing its pro-Russian president, Viktor Yanukovych, on the one hand, and concluding an economic agreement with the European Union on the other. Last week, after around three months of demonstration and street protest by the people of Ukraine, which at times turned to violence, President Yanukovych was forced to step down and flee to Russia, where he seems to have set up a government-in-exile. The new government in Ukraine has declared that it will revise the constitution to give more freedom to the people, and will also proceed with its economic agreement with the EU.

In the meantime, the Russian Federation has been tossing and turning. According to Washington Post, last Friday the new Ukrainian government said that hundreds of soldiers in green camouflage, without insignia but carrying military-style automatic rifles, had taken over two airports in Crimea. Also, videos of Russian military helicopters flying over Crimea were broadcast on the Internet; and Russian IL-76 planes suspected of carrying 2000 troops landed at a military base near the regional capital of Simferopol. According to RIA Novosti, the Russian President, Vladimir Putin, requested approval from the country’s upper house of parliament to move Russian armed forces into Ukraine last Saturday; and, according to CNN, Russia’s upper house of parliament unanimously approved it. As Ukraine has put its forces on full combat alert, the situation in Crimea is likely to escalate into all-out war.

Now, this was not an unpredictable move on the part of Putin. Ukraine has always been a geopolitically and economically significant region for Russia, as Crimea houses a most strategic Russian naval base on the Black Sea coast, and as Ukraine with a population of 45 million constitutes a profitable market for Russia. However, this does not seem to be the only reason. What is in motion in Ukraine could be only the first in a chain of events that would jeopardize the Russian hegemony over the other smaller republics: it can be the beginning of the Second Perestroika; and Putin, already aware of the consequences, seems to be intent upon obstructing the further unraveling of his shaky empire.

As the Russian troops flood into southern Ukraine, the specter of the past arises once more: the pale, black-and-white pictures of the Soviet tanks parading in the streets of Budapest and Prague take color; and the futility of attempting to hold a people slave through force and bloodshed while all they want is their freedom – which they will eventually achieve one way or another – is called to mind. History repeats itself, but perhaps as a “tragicomedy” this time, for times have changed indeed.

When the divisions of the Warsaw Pact overran Budapest and Prague behind the Iron Curtain, presumably hidden from the watchful eye of the world, the world had not yet shrunken into a “global village” through myriads of networks that would instantly set before the eyes of the world community any atrocities committed anywhere. Moreover, there is no puppet regime in Ukraine to bolster Putin’s stance. In addition to this, it seems that the US and the EU are on the lookout to actively assist the Ukrainian provisional government. Most important of all, a lively public sphere has taken shape in Ukraine that is well aware of its own good, and during the past three months has most appropriately shown that it cannot be coerced to comply. Therefore, the rules of the game have drastically changed. As such, it is now a matter of how far Putin is ready to go to postpone the inevitable.