Genealogies of Religion, Twenty Years On: An Interview with Talal Asad 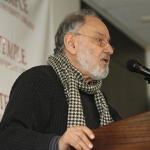 Craig Martin: Last fall, realizing that 2013 marked the twentieth anniversary of Talal Asad’s Genealogies of Religion: Discipline and Reasons of Power in Christianity and Islam, I interviewed Talal Asad—Distinguished Professor of Anthropology at The City University of New York—on the book and its reception and influence on the field. Genealogies of Religion influenced me early in my graduate studies—particularly the first chapter on “The Construction of Religion as an Anthropological Category,” in which Asad argues that the concept of “religion” is, in many contemporary contexts, fundamentally shaped by Protestant assumptions. This was one of the first books I was exposed to that argued there is normative work accomplished by the very term “religion,” and all of my writings since have taken this idea as a central starting point. I want to thank Asad for taking the time to answer the questions I posed to him.

Craig Martin: Can you discuss what you most hoped to accomplish with Genealogies of Religion? Do you think the book was received in the way you hoped it would be?

Talal Asad: As far as I can tell, most people have understood that I was trying to think about religion as practice, language, and sensibility set in social relationships rather than as systems of meaning. In that book and much of my subsequent work I have tried to think through small pieces of Christian and Islamic history to enlarge my own understanding of what and how people live when they use the vocabulary of “religion.” I certainly did not want to claim that as a historical construct “religion” was a reference to an absence, a mere ideology expressing dominant power. It was precisely because I was dissatisfied with the classical Marxist notion of ideology that I turned my attention to religion. I was gradually coming to understand that the question I needed to think about was how learning a particular language game was articulated with a particular form of life, as Wittgenstein would say.

The business of defining religion is part of that larger question of the infinite ways language enters life. I wanted to get away from arguments that draw on or offer essential definitions: “Religion is a response to a human need,” “Religion may be a comfort to people in distress but it asserts things that aren’t true,” “Religion is essentially about the sacred,” “Religion gives meaning to life,” “Religion and science are compatible/incompatible,” “Religion is responsible for great evil,” “So is science —and religion is also a source of much good,” “No, science is not a source of evil, as religion often is; it is technology and politics that are the problem—the social use to which science is put.”

I argued that to define “religion” is to circumscribe certain things (times, spaces, powers, knowledges, beliefs, behaviors, texts, songs, images) as essential to “religion,” and other things as accidental. This identifying work of what belongs to a definition isn’t done as a consequence of the same experience—the things themselves are diverse, and the way people react to them or use them is very different. Put it this way: when they are identified by the concept “religion,” it is because they are seen to be significantly similar; what makes them similar is not a singular experience common to all the things the concept brings together (sacrality, divinity, spirituality, transcendence, etc.); what makes them similar is the definition itself that persuades us, through what Wittgenstein called a “captivating picture,” that there is an essence underlying them all—in all instances of “religion.”

The things regarded as hanging together according to one conception of religion come together very differently in another. That’s why the translation of one “religious” concept into another is always problematic. But Genealogies doesn’t argue that the definition of religion is merely a matter of linguistic representation. Religious language—like all language—is interwoven with life itself. To define “religion” is therefore in a sense to try and grasp an ungraspable totality. And yet I nowhere say that these definitions are abstract propositions. I stress that definitions of religion are embedded in dialogs, activities, relationships, and institutions that are lovingly or casually maintained—or betrayed or simply abandoned. They are passionately fought over and pronounced upon by the authoritative law of the state.

Definitions of religion are not single, completed definitive acts; they extend over time and work themselves through practices. They are modified and elaborated with continuous use. To the extent that defining religion is a religious act, whether carried out by “believers” or “nonbelievers,” it may also be an attempt at attacking or reinforcing an existing religious tradition, at reforming it or initiating a new one.

My problem with “universal definitions of religion,” therefore, has been that by insisting on a universal essence they divert us from asking questions about what the definition includes and what it excludes, how, by whom, for what purpose; about what social/linguistic context it makes good sense to propound a given definition and when it doesn’t.

Trying to construct genealogies of concepts is one way of getting at such questions. For me the most important concern in all my writing has been, “What, in this matter, is the right question?” So in Genealogies of Religion I did not try to provide a better definition of “religion,” still less to undermine the very concept of “religion.” I was looking for ways of formulating the most fruitful questions about how people enact, declare, commit to—or repudiate—things when they talk about “religion.” Thus in Chapter 4, in my exploration of Hugh of St. Victor’s account of the sacraments, and of Bernard of Clairvaux’s monastic sermons, I tried to get away from notions like “inculcation,” a passive reception of dominating power, and to move towards something more complex. Thus I wrote, “Bernard is not manipulating desires (in the sense that his monks did not know what was happening to them) but instead creating a new moral space for the operation of a distinctive motivation.” What interested me was how such subjective processes related to embodiment and discipline—or put differently, how objective conditions in which subjects find themselves enable them to decide what one must think, how one can live, and how one is able to live. This was the project I was engaged in when I wrote the essays making up Genealogies, and this is what I’m still engaged in. I don’t think of that book in isolation from my other work. 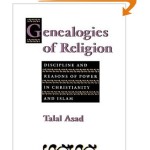 Many readers have understood what I was trying to do and sympathized (even if guardedly) with my effort. Some haven’t. It has even been alleged by the latter, to my surprise, that I am hostile to “religion,” and especially to the Christian religion, and that I developed my hostility during my childhood when I was supposedly “humiliated” at boarding school run by missionaries (in India)—because I once referred to that period in my early schooldays as the time when I learnt to argue, to be “combative,” with my Christian schoolmates! I was never “humiliated” by Christian missionaries and never said I was.

More important: anyone who has read Genealogies of Religion with some attention surely can’t make sense of that claim. In fact I’ve learnt much about the complexity of “religion” by reading Christian writers belonging to different historical periods. I certainly don’t think that when people use a religious vocabulary they are really talking about mere constructions—about ideological formations whose role is to provide justification for social domination. Of course something is constructed, and reconstructed, but this construction is not teleological (made and completed for a specific purpose), and it is not properly described as essentially social. That kind of functionalism is precisely what I wanted to get away from in Genealogies.

CM: Could you comment on the different reactions to your work by other disciplines or sub-disciplines? I’m familiar with how religious studies scholars have reacted to your work, but do you feel that this work has made the impact you hoped it would in, for example, anthropology, political sciences, sociology, as well as the diverse areas of religious studies?

TA: I really don’t know what impact Genealogies has had in the social sciences generally. I know that a number of talented young anthropologists have taken up the idea of embodiment, of sensibilities, of tradition, and of virtue ethics in their ethnography of Islam. They have recently been criticized by some people for exaggerating the importance of “formal religiosity” at the expense of “ordinary spiritual beliefs” and I have been blamed for having started this bad tendency—and then carried it on into a “reactionary” view of secularism. This is not the place to engage with their complaints, especially because they largely concern the anthropology of Islam—and so they are focused more on an earlier essay of mine as well as on Formations of the Secular. I gather that many sociologists and anthropologists studying Muslim immigrants in Europe feel that my work is perversely normative, that it deliberately ignores the reality of the social experience of Muslims and their religious response—in short, that it overlooks their modern predicament in secular liberal countries. That’s one kind of reaction to my work, I suppose. But I am curious as to why they feel so strongly that my work threatens their truth.

When I was an anthropology student we used to joke about senior ethnographers who responded to theoretical arguments in seminars by interrupting, “But in my tribe people believed . . .” This kind of empiricism is still, unfortunately, with us. Many ethnographers think that they have a proper understanding of their informants’ experience (and therefore of their religious belief or disbelief) by virtue of the fact that they have spent some (limited) time with them in their form of life—as if the experience of their informants was homogeneous, complete and consistent, as if their form of life (shared briefly by the ethnographer) could be summed up in a representation reflecting an indisputable reality and was not itself an internally ambiguous interpretation, and as if their ordinary language was more authentic than the language of their theological texts.

At any rate, there has been greater interest in Formations than Genealogies of Religion among political scientists, although I see the former book as closely connected to the latter and its questions about secularism more developed than they are in Genealogies. This interest is, I suppose, due to questions of pain, violence, and suffering that I share with some of them. They already know that things are not as simple as some versions of liberal ideology claim they are.

This part of an interview conducted by Craig Martin with Talal Asad, which appears in the February issue of the Bulletin for the Study of Religion, Vol. 43, No. 1 (2014). To read the full interview, please follow the link to order a copy of the journal or to read it on-line.