How Is This Dutch Company Using a Harem to Sell Chocolate Milk? 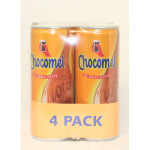 The Dutch chocolate-milk manufacturer Chocomel has produced a new commercial that has gotten nearly 800k views on YouTube in the three weeks since it was posted. How has a commercial for a sweet dairy drink drawn that kind of attention? By employing old Orientalist and racist tactics, and Arab face. You know the kind: sleazy Arab sheikh tries to get what he wants by luring an innocent white man into his “palace,” where eager, exotic women line the walls.

Although, I must admit they’ve put some fresh spins on an old move. Here’s how:

As soon as the door opens, Arabic instruments mix with beats and a male voice repeats, “It’s a palace, it’s a palace.” There’s an “Ahhhhhh” that is heard periodically marking time like a tambourine. In fact, the song is so catchy a bunch of people made comments on YouTube asking who sings it.

I’ve never seen such a diverse harem. African-heritage, Latina-looking types, blondes — maybe even some “real” Arabs. Of course, they’re wearing beaded belly-dancing costumes, but they definitely move their bodies to the beat and are way more perky than most harem girls I’ve seen. It’s as if we’re at the Staples Centers in downtown Los Angeles watching the cheerleaders on the basketball court.

3. Even veiled women are sexy.

Typically women wearing the hijab are represented as docile and oppressed. But not in this harem. A veiled woman-in-red opens the door, inviting the white man in by signaling him with her fingers. Veiled and nearly nude women are typically juxtaposed against each other, but here they all just get along.

4. There’s a pool and a woman swinging over it.

I mean, if you’re going to get lured into a sexy, exotic palace, there should be a shallow pool in the center of the room so that women can get themselves wet. And, if you have a pool of water, you have to have a woman swinging over it on pink-petaled vines, right?

This is a first. “Hey, tourist!” he shouts from his SUV in the middle of the desert, “I want that!” pointing to the can of chocolate milk. (Yeah, the Dutch sell chocolate milk in a can.) Later, sitting on his throne, he downs the drink like its ambrosia. It’s not money or women he’s after — he already has them — what he covets is what the white man has. Viewer beware of traveling to “Arabia,” you may get robbed — of your chocolate milk.

If you haven’t yet, click on the clip above and see for yourself.

Tell them what you think:

Through their website, which is in Dutch, but Google translate can help you choose “complaint” above the comments field. You’ll have to submit a snail-mail address, just make sure your zip code reads in Dutch format. Try “1111 AA.”