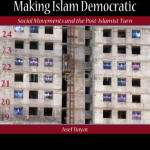 Discussions of contemporary Islam in the United States tend to be held in black and white, with the religion depicted either as a backward, dangerous and hateful force, or as a misunderstood and moderate foundation for peaceful living. Discussions in Europe range over a somewhat larger spectrum because they are often based on experiences with immigrant communities, and usually engage cultural issues in addition to security–related ones.

The most colorful and useful expositions for readers in search of a deep understanding of Islam today, however, are those based on detailed and long–term observations made in Muslim–majority countries, where interactions with Euro–American sensibilities do not confound the issue. Having said that, the drawback with such in–depth analyses is that they typically examine a single country, leaving it to readers to decide how similar or dissimilar Muslim life in Morocco, say, is from that in Bangladesh or Somalia.

Whether monochromatic or broadly colorful, however, discourses involving Islam are welcome in every hue, either because of their informative contents or as manifestations of growing ideological controversies. Nevertheless, there are a few studies of exceptional value that stand out from the mass of publications and deserve to be read by every serious observer. Asef Bayat’s Making Islam Democratic is one of those few.

The flap copy tells us that Bayat is the Academic Director of the International Institute for the Study of Islam in the Modern World (ISIM) and ISIM Professor at Leiden University in the Netherlands. But even those who are familiar with ISIM and its highly informative newsletter may not know that Bayat grew up in Iran, published an outstanding book on the role of poor people in the Iranian revolution, and then spent 17 years teaching sociology at the American University in Cairo before accepting the ISIM directorship.

Consequently, his depth of knowledge about two of the world’s largest and most important Islamic countries is almost unparalleled. It informs the heart of his book, which eloquently describes the many manifestations of Islam in the public and private lives of Iranians since the 1979 revolution, and of Egyptians from the 1990s onward. The former, Bayat argues, felt the effects of an Islamic Revolution, but were never swept away by an Islamic Movement, while the latter experienced the opposite:

The tidal wave of Islamism that seemed poised to wash away the Egyptian state actually left it intact and subsided by the late 1990s. In fact, the state skillfully surfed the wave, weathered its initial crash ashore, and rode its smooth sprawl into society. But along the way society, state, and movement all went through significant change. The Islamist movement rendered the state more religious (as it moved to rob Islamism of its moral authority), more nationalist and nativist (as the state moved to assert its cultural Arab–Islamic authenticity), and more repressive, since the liquidation of radical Islamists offered the opportunity to control other forms of dissent. The “seculareligious” state both controlled and connected with conservative social forces, hindering the rise of innovative intellectual and political initiatives.

Bayat supports this basic thesis with a precise and lucid presentation based on a distinction between Islamism and “post–Islamism,” a term he first used in a 1996 essay and applied only to Iran to distinguish between the Islamic revolutionary movement of the 1970s and the emergence of a reformist movement that would climax in the election of Mohammed Khatami to the presidency:

In my formulation, post–Islamism . . . refers to political and social conditions where, following a phase of experimentation, the appeal, energy, and sources of legitimacy of Islamism are exhausted, even among its once–ardent supporters. Islamists become aware of their system’s anomalies and inadequacies as they attempt to normalize and institutionalize their rule. Continuous trial and error makes the system susceptible to questions and criticisms. Eventually, pragmatic attempts to maintain the system reinforce abandoning its underlying principles. Islamism becomes compelled, both by its own internal contradictions and by societal pressure, to reinvent itself, but it does so at the cost of a qualitative shift.

Since the term “post –Islamism” was taken up by other analysts, mostly in Europe, there has been a substantial debate about its precise meaning and applicability. Since Islamic movements in most countries have not achieved enough power to indulge in “continuous trial and error,” for example, Bayat’s precise definition cannot be exported outside Iran without modification. But there is no debate about the extent to which Islamic political movements in many countries have moved over the past quarter century from unequivocal endorsements of Islamic rule to thoughtful considerations of how an Islamic movement can function within various political systems; in particular, on how it can dovetail with the practices, attitudes, and social expectations that democracy entails.

Bayat’s arguments in Making Islam Democratic are simultaneously theoretical and practical. He uses sociological insight to clarify his observations rather than to construct an impractical typology. The level–headedness that is the hallmark of this work derives from Bayat’s own life. An atypical academic, Bayat’s earliest schooling was irregular, with his truck–driver father having to fill in the gaps in his formal education.

Bayat eventually earned his doctorate in Britain at a time when the Pahlavi regime was in its final years. Speaking of this experience to journalist Willa Thayer for a 2003 profile in Al Ahram Weekly Online, Bayat said, “When I went to Britain to study I realised I didn’t know anything . . . It was very tough because when I went back to Iran to see what was going on — a few months after the victory when the revolution was still unfolding —I had a kind of a mental block, I couldn’t make sense of things and I had many doubts about my own ability to do so.”

Doubt was perhaps the best frame of mind for Bayat to have had at that critical historical moment. Instead of having his vision of society overdetermined by his graduate training, he instead observed what was going on around him and concentrated on making conceptual sense of it. His efforts at understanding bore fruit in his outstanding book Street Politics: Poor People’s Movements in Iran. When this was published in 1997, Bayat had already been teaching for a decade at the American University in Cairo, where his analytical skills had been refined through a comparison of Egyptian manifestations of Islam with those in his homeland. Where his first book concentrated on the interactions of Iran’s revolutionary leaders with the shanty–town dwellers and push–cart peddlers of Tehran, Making Islam Democratic sets Egyptian and Iranian events within a more complex and theoretical argument.

In the concluding chapter of the book, “The Politics of Presence: Imagining a Post–Islamist Democracy,” Bayat recognizes that there is no yellow brick road leading the pure of heart to an imaginary promised land:

If one obvious conclusion can be drawn from the preceding chapters, it is that Islam is the subject of intense conflict between different segments of the faithful. Women, youths, the middle classes, the poor and the powerful, the “modern” and the “traditional,” clerics and laymen are all engaged in redefining the truth of their creed through either ordinary daily practice or deliberate campaigns. In doing so, they render religion a plural reality with multiple meanings.
The agents of historical change, Bayat says, are not theories, but decisions taken by Muslims at every level of society as they strive for a better life for themselves and their children:

Congruence between Islam and democracy is not simply a philosophical issue, as it is widely assumed, but a political one. It is a matter of struggle. The pertinent question is not whether Islam and democracy are compatible (least of all because of the contested meanings attached to both Islam and democracy), but rather how and under what conditions Muslims can make their religion compatible with desired notions of democracy; how they can legitimize and popularize an inclusive reading of their doctrine in the same way that democrats have been struggling to broaden narrow (white, male, propertied and merely liberal) notions of democracy.
Bayat argues his case strongly. Not everyone will agree with him. But even those who are not persuaded by Making Islam Democratic will find much of value in this remarkable book.

At the outset, I distinguished between books on Islam that are written within an American context, those reflecting a European perspective, and those based on a close examination of life in Muslim–majority countries. The broad spectrum of colors ascribed to the third category is vividly apparent in Bayat’s work. Yet the question may reasonably be asked whether an expert dissection of society and politics in Egypt and Iran serves the interests of readers who are mainly interested in European immigrant societies or in America’s post-9/11 anxieties. In my opinion, the theoretical envelope that Bayat constructs to contain and elucidate his observations of Egypt and Iran is broad enough to challenge all serious readers. Making Islam Democratic works on a variety of levels. Its insights are relevant to many different situations, from the parochial to the transnational, and from the quotidian to the philosophical. I hope it will challenge other authors to write about Islam with a similar combination of real world observation, analytical sophistication, and constructive purpose.

Richard Bulliet is a professor of history at Columbia University, and is the author, most recently, of The Case for Islamo-Christian Civilization.