By Guest contributor(s)Tuesday 19 May 2015 No Comments 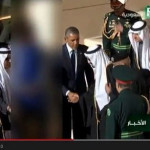 President Obama has good reason to try to reassure GCC leaders this week at Camp David that America has not abandoned them; they represent an important economic force. But they cannot, as constituted, represent a positive force for leadership in the region.

The New York Times on 11 May quoted a former US ambassador to Riyadh as saying that “King Salman is very clearly stepping up and ensuring that Saudi Arabia is taking the leadership role in the region.” But just what is leadership? The former ambassador may be leading Washington down the garden path.

There’s no question that Saudi Arabia is stepping out with unprecedented new vigor, in publicly and unapologetically intervening militarily in Yemen, Syria, Bahrain—with maybe more to come in Libya. But does that constitute leadership?

Leadership should imply a sense of direction, a vision, a coherent ideology or set of foreign policy values and principles that lead to transformation, movement towards a more developed, more desirable state of affairs down the road. Saudi Arabia fails on all these fronts.

Saudi policy in my view can best be described as reactionary, retrogressive, counter-revolutionary, and oriented towards preserving a status quo that few would find desirable or admirable in this modern world. Freezing the status quo is not a policy, a vision, or an exercise of “leadership.” It is sheer panicky defensiveness.

Saudi military assaults and airstrikes on Yemen are brutalizing the civilian population and destroying its infrastructure, leading to desperate shortages of medicine, food, water, and even access by air to the outside world. Riyadh is intent upon reestablishing a dominant voice in Yemeni affairs. Yet in the face of Yemeni resistance and growing international outrage, that outcome seems ever more distant. This is not leadership.

And what are the beliefs, ideology, or vision of the Kingdom for the Middle East? Interestingly, the Kingdom makes no public appeals to the region in the name of its own Salafi/ Wahhabi form of Islamic thought. It does, however, spend large sums to buy influence through the vehicle of schools and religious centers—now even militias—it funds that do promote this narrow and intolerant version of Islam. Ironically, if any group is publicly and actively propagating Wahhabi theology today, it is ISIS, in its most extreme form. In fairness, Wahhabism does not have to be violent; it can simply impose harshly restrictive social norms upon daily life as it does in Saudi Arabia. But it does not create modern societies.

What about vision or ideology? Can Riyadh even be taken seriously as promoting some contemporary Islamist vision for the future governance of the region? Its denunciations of the Muslim Brotherhood or Iran as “terrorist” is largely unreal. Many countries like Turkey and Qatar view the Brotherhood as the most promising vehicle for the further evolution of Islamist thinking and politics in the direction of greater democratic practice; while the Brotherhood still has much to learn, and needs more governing experience, it has demonstrated a slow grudging but real acceptance of concepts of a democratic multicultural society. To denounce what is probably the most moderate and experienced Islamic movement in the Arab world in favor of the Wahhabi model of a closed political and social order can hardly be called Islamic leadership.

If not an Islamist vision, then what about Arab nationalism—another key ideological strand woven through modern Arab history? Nationalism, even regional nationalism, can also provide a potentially legitimate basis for mobilizing public opinion towards political, social, economic and international goals. Yet Riyadh has no presence on this podium either. Ironically, even calls for a just settlement in Palestine—the preeminent demand for political and social injustice in the region—does not figure in Saudi rhetoric; indeed it even seeks cooperation with Israel in order to promote its anti-Syrian, anti-Muslim Brotherhood, anti-Iran rhetoric. No nationalist appeal here.

OK, what about some possible left-of-center agenda—one that would call for social justice, greater equality of life in the region that is already divided by a massive gap of haves and have-nots? A socialist call for reform could have some regional resonance (although it would have to do better than the false starts of “Arab socialism” of the past. ) Yet Riyadh despises this ideological trend too.

Saudi Arabia thus seems to fail in every single particular of advancing some form—any form—of vision or ideology for the future of the Middle East. Instead it opts to promote absurdly hyped fears about Iranian intentions and capabilities in the Gulf, while issuing sweeping denunciations of Shi’ite Islam as the leading source of sectarian hostility and violence. It strikes out in fearful defensiveness.

Sadly, another leadership claimant, Egypt, has similarly excluded itself from the ranks of any claim to regional leadership, in its own absence of ideological vision, its suppression of democratic practice, and criminalization of the Muslim Brotherhood—still the single biggest civil movement in Egypt. Nor does Cairo issue any calls for a broad Arab approach to common regional problems; it rather retains its corrupt Mubarak-era business elites and coddled military elites, pinning its hopes on serving as praetorian guard to the Gulf states. Does anyone really believe that Egyptian forces will one day ride in to save the day against some imminent Normandy-type landing of Iranian forces on the southern shores of the Gulf?

President Obama’s 14 May Camp David summit with Gulf leaders consists of oil states that (mostly) buy into Riyadh’s counterrevolutionary rhetoric. Certainly there are legitimate regional issues to be discussed—about the kinds of institutions required to manage long-range cooperation on political, economic, social and security issues. But the GCC is not a meaningful venue. How can the US talk about the “architecture of Gulf security” or regional security arrangements, when the two of the leading powers of the Gulf, Iran and Iraq, are not even invited? What kind of leadership can emerge from this kind of crippled and truncated summit?

President Obama has at least wisely declined to underwrite an unwise GCC proposal for a US “defense treaty” with these six states. That is the beginning of wisdom.

In the meantime we still look around for anything that can pass for forward-looking leadership among the Arab states these days. Unfortunately it’s not to be found in Riyadh.

Graham E. Fuller is a former senior CIA official, author of numerous books on the Muslim World; his latest book is “Breaking Faith: A novel of espionage and an American’s crisis of conscience in Pakistan.” (Amazon, Kindle)