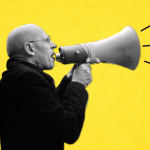 Do you still need a working knowledge of the ideas of Michel Foucault to hold your own on the cocktail party circuit? Probably not, but the ideas themselves, should you bring them up there, remain as fascinating as ever. But how, apart from entering (or re-entering) grad school, to get started learning about them? Just look above: Alain de Botton’s School of Life has produced a handy eight-minute primer on the life and thought of the controversial “20th-century French philosopher and historian who spent his career forensically criticizing the power of the modern bourgeois capitalist state.”

Perhaps that sounds like a parody of the activity of a French philosopher, but if you watch, you’ll find highlighted elements of Foucault’s grand intellectual project still relevant to us today. “His goal was nothing less than to figure out how power worked,” as de Botton puts it, “and then to change it in the direction of a Marxist-anarchist utopia.” Even if you have no interest in Marxist-anarchist utopias, you’ll find much to think about in Foucault’s criticisms, summed up in the video, of institutions of power having to do with medicine, mental health, criminal justice, and sexuality — under which we all, in some form or another, still live today.

Once the School of Life has got you briefed on this wealthy altar boy (!) turned widely-polarizing, sexually avant-garde intellectual, you can get into more depth on Foucault right here on Open Culture. We’ve got his UC Berkeley lectures (in English) on “Truth and Subjectivity” and “The Culture of the Self,;” an interview with him long thought lost; a 40-minute documentary on him, and the TIME article and fanzine that got his name spreading around America. You’ll find that, though Foucault himself passed away more than thirty years ago, his observations of modern society still have an impact — and they’ll surely raise an eyebrow or two at the next office party.

The 1981 TIME Magazine Profile That Introduced Michel Foucault to America

Hear Michel Foucault Deliver His Lecture on “Truth and Subjectivity” at UC Berkeley, In English (1980)

Hear Michel Foucault’s Lecture “The Culture of the Self,” Presented in English at UC Berkeley (1983)

Watch a “Lost Interview” With Michel Foucault: Missing for 30 Years But Now Recovered

Read Chez Foucault, the 1978 Fanzine That Introduced Students to the Radical French Philosopher

Nietzsche, Wittgenstein & Sartre Explained with Monty Python-Style Animations by The School of Life

Colin Marshall writes on cities, language, Asia, and men’s style. He’s at work on a book about Los Angeles, A Los Angeles Primer, and the video series The City in Cinema.