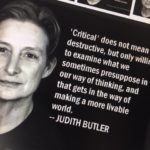 “For me, the task is not to find a single or synthetic framework, but to find a way of thinking in alliance.”

Judith Butler has certainly made her mark on gender studies. Her critical work on feminist thought and psychoanalysis, together with her readings of Derrida and Foucault, have made her an intellectual reference point worldwide. Born in Cleveland, the philosopher teaches literature at the University of California, Berkeley. Her major work Gender Trouble, published in the United States in 1990, redefined a feminist politics of subversion. Judith Butler’s thinking is troubling because she has chosen to enter into the “problematic articulation” of gender and sexuality, deploying the concept of “performativity.” Butler’s thinking addresses the margins (“queer studies”) and calls for the deconstruction of unstable identities. She received the Adorno Prize in 2012.

What changed with the #Metoo movement?

The important contribution of “#metoo” is that the larger public is able to grasp the systemic and pervasive existence of coercive sexual conduct against women. These are not simply a series of incidents, but they point to the taken for granted character of sexual coercion. It is important as well because very often women feel shamed when they have suffered sexual violence. So the story is not told, and the furtive status of this form of violence continues. Many people now believe that the feminist thesis, namely, that this kind of behavior is pervasive and status quo is finally believable. The efforts to hystericize women who tell the story of make the complaint are no longer quite plausible. And perhaps they will become less plausible in the future.

Since the Women’s March following the election of Donald Trump in the United States, the feminist movement has been at the heart of the challenge to the patriarchal, conservative, and neoliberal system. Has feminism become the representative of a new “proletariat,” in Marx’s sense, a “class” whose interest it is to overthrow the established order?

No, I do not think that women are the new proletariat, although working-class and poor women have always been part of that class. Indeed, there is no way to think about class without thinking about the disproportionate ways that women suffer from both poverty and illiteracy. And we cannot think about the category of women without thinking about class. These categories are already part of one another, and not separate axes of power. Of course, those who have theorized class have not always paid attention to women, and feminists have sometimes focused on patriarchy to the exclusion of class. But we need richer descriptions than such frameworks can provide. If we ask, how is class lived as gender? Or how is race lived as class? We start to see how textured realities can appear within our modes of representation, and these will make our political analysis more vibrant and compelling. Some call this intersectional.

What is the route from challenging masculine and capitalist domination to building political alternatives? Where should we look for a unifying political project?

As important as it is to think about Bourdieu’s notion of masculine domination and the continuing exploitative and alienating powers of capitalism, those are not the only two modes of power at work. It is not clear, for instance, whether neoliberalism is the same as late capitalism or whether it is a separate mode of power. Further, discrimination on the basis of gender is not always the same as discrimination against women. Many people who do not conform to gender norms — masculine or feminine — suffer from discrimination and violence, and that form of gender discrimination cannot be explained by the framework of masculine domination. And discrimination on the basis of race, immigrant status, religion, and sexuality, all have to be understood as part of the present climate of reactionary politics. For me, the task is not to find a single or synthetic framework, but to find a way of thinking in alliance. The alliance is broad, and it is expanding, and it is a struggle for a more radical democracy. If there is a common political project, it is to be found in the affirmation of a society that will join together to fight the new forms of authoritarianism and fascism — women and their allies will doubtless be at the forefront, but so too will be the queers and the trans, the sans papiers, and those whose work no longer pays them a living wage. If we know what we are fighting, and what kind of world we wish to build, we may well find our common cause.

The image expresses ultra-conservatives’ and religious fundamentalists’ hatred for the works of this leading figure in gender studies. Invited to take part in a conference in Brazil in November 2017, Judith Butler was greeted by unusually violent demonstrations. The presence of guards prevented the hostilities breaking out even at São Paulo international airport, in the country’s economic and cultural capital. Insults were accompanied by actions. Demonstrators brandishing crucifixes burned a “witch,” an effigy of Butler. This was a reference to the practices of the Inquisition where the “possessed” were destroyed by fire. The philosopher’s reaction? “I was horrified. Perhaps the people who burned an effigy of me, representing me as a witch who defends trans people, did not know that the women who were called witches and burned alive were women whose beliefs did not correspond to Catholic dogma. … Witches were attributed special powers, as scapegoats whose death would supposedly purge the community of moral and sexual corruption.”