Hit enter to search or ESC to close
artMiddle East

Though bookstore cafes in Europe, or even in most Arab countries, are by no means a revolutionary idea by now, one little establishment named Book Cafe has captured the imagination of both the Arab and international media. By Sahar Moqaddem 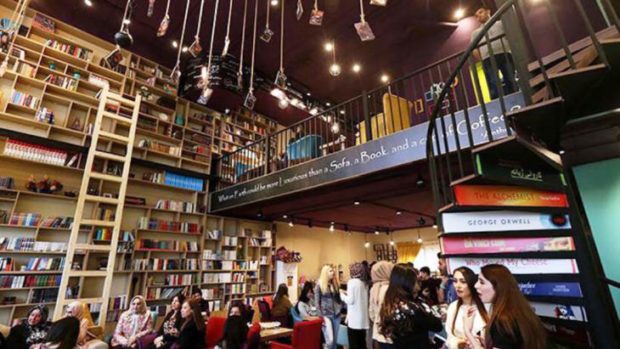 A small cafe in Iraqi Kurdistan has become the talk of the town and the reason is precisely that: that the cafe exists in Iraqi Kurdistan. Any journalist or individual who has ever been in contact with the region will know how difficult it is to launch such a project in Erbil,
especially in light of the country′s economic crisis, its $22 billion debt and the regional government′s inability to pay salaries to public sector employees.

Add to this is the tumultuous security situation. Mosul, until recently occupied by Islamic State, is only about 50 kilometers away from Erbil. The situation is further compounded by the Syrian refugee crisis and the displaced Iraqis, as well as ongoing disagreements with the Baghdad government.

How then, under such circumstances, did Rafan al-Ta′i and her friend find the time and will to launch this unique, colorful project?

Enter the cafe and everything that is happening in the outside world seems to slip away. This feeling is not accidental; al-Ta′i, the cafe owner and an editor at Wikipedia, took her time and made every effort to carefully select every detail.

Each piece of furniture, each bookshelf, each decoration was meticulously selected and designed, giving the place its distinctive aesthetic. Visitors finds themselves surrounded by books as they sip on coffee or a snack; shelf upon shelf chock-full of books, a wall clock with numbers shaped like books and even a telephone and curtains in the shape of books.

The cafe has more than 3,500 books in Arabic, Kurdish and English. Yet, just over a year ago, it was extremely difficult to obtain any novel in Erbil, especially in Arabic and English.

Al-Ta′i tells us that she opened the cafe to encourage people to read. “I opened the cafe because I love beauty and I appreciate it. My main goal is to make people love books,” she says. In her eyes, the primary cause of all conflicts is ignorance and dogmatism, whereas
reading allows individuals to come to the realization that “we are all so terribly similar.”

Although the place is designed to cater to all book lovers, al-Ta′i insists that she is not there to serve a certain social segment, ethnicity, or sect, noting that everyone is welcome in the cafe.

“I would even like those who do not come to read to visit the cafe,” she says. “Soon, they will be gripped by curiosity about a certain book title and begin to browse. If I can reach this stage, I will have already succeeded.”

The art of perseverance

Al-Ta′i notes that the difficulties she faced in launching the project were primarily financial. “We went to investors, but no one agreed to fund us, because they were convinced that no one was interested in reading in Erbil,” she said. “We tried to take out a loan from the bank, but the whole system of loans does not exist here.”

As a result, al-Ta′i and her business partner had to resort to pooling together all of their savings to start the project.

The second difficulty she faced was bureaucracy, which significantly slowed down the procedures. And then there were the grave social difficulties: 99% of the surrounding buildings and environment in Erbil had been destroyed, creating a great deal of negative energy, as she put it. “I was on the point of giving up. I had come to expect that my idea would be met with ridicule,” she says, emphasizing that the project required a lot of courage.

A refuge for everything that’s novel and creative

“When I opened the bookshop, I thought I would lose [money]. But I decided that it didn′t matter and I told myself that if no one came in and the project failed, I would accept it.” However, contrary to her expectations, the cafe has been a great success among young Arabs and Kurds and even attracted foreigners. This small corner, with its vibrant decor, has become a refuge for everything that is novel and creative in Erbil.
Here, the educated elite gather, musical and cultural evenings are held, as well as book signings and other cultural events that are rarely seen elsewhere in Kurdistan.

Al-Ta′i nonetheless considers the greatest indicator of her success to be the fact that the people accepted the idea and fell in love with it. “Women here have a hard time deciding what to wear because no one grants them this freedom, let alone the freedom to take a decision to launch such a big project,” she notes.

“Any woman who decides to open a project like this in the U.S. has a hundred different means; she can take out a loan from the bank, or launch crowd-funding campaigns. Life is easier there. As for us, we have to have a lot of patience and determination, because the journey is likely to be long and arduous.”