As anti-immigrant sentiment erupts in Western democracies from Germany to the United States, some cities are still finding ways to make immigrants feel at home.

I conducted hundreds of interviews with immigrants in New York, Paris and Barcelona intermittently for over a decade to understand how each city integrates – or excludes – its migrants.

My new book, “A Place to Call Home,” explains why some cities and their residents do better at incorporating foreign-born newcomers in the local economy, culture and politics.

A feeling of belonging On the surface, immigration in these three cities looks quite different.

Over one-third of all New Yorkers were born abroad, the majority of them in Latin America and the Caribbean.

In Paris, where 20 percent of the population is foreign-born, most immigrants and their children come from Algeria, Morocco, Tunisia and other former French colonies in North Africa.

Much of Barcelona’s immigrant population, around 17.8 percent of its total population, is Latin American or Moroccan.

Despite their diverse origins, the immigrants I spoke with consistently cited the same elements as being critical to their sense of urban belonging, helping them to feel “at home” while working, socializing and raising a family in the city.

New York and Barcelona, it turns out, foster this sense of belonging more than Paris does.

Lots of jobs
In part, interviewees told me, that’s because New York and Barcelona both have ample jobs open to immigrants in both the formal and informal sectors.

Immigrants are vital to New York City’s economy. According to the New York state comptroller’s office, immigrants account for 43 percent of the city’s workforce and nearly one-third of its economic output.

Immigrants have a strong presence in the service sector and construction. Additionally, according to a 2016 comptroller’s report, “Many industries, such as technology, finance and information, draw on a worldwide talent pool of immigrants to maintain their competitiveness.”

Barcelona, too, has depended on immigrant labor to grow its economy. Until Europe’s 2007 economic crisis, when high unemployment slowed immigration and compelled many foreign-born workers to return to their countries of origin, immigrants were an important part of the labor force.

Employers in both cities are also generally accepting of undocumented status. Some 560,000 undocumented people live in New York City, according to a March 2018 report by the city, which is 6.3 percent of the city’s total population. Undocumented immigrants in New York have a high labor-force participation rate – 77 percent for people ages 16 and above.

In Manhattan, the act of closing down some main avenues to host the Saint Patrick’s, Puerto Rican, Dominican or Mexican Day parades is an important sign of solidarity with foreign-born residents and their descendants.

In Barcelona, the Service Center for Immigrants, Emigrants and Refugees is a government service that provides free resources for immigrants on how to obtain legal status and eventually obtain Spanish nationality. It also provides educational, employment and housing services in seven different languages.

In New York, many different immigration organizations advocate for immigrant rights and provide numerous resources and programs throughout the city. They also aim to elect immigrants into political office and community leadership positions to improve immigrants’ public representation.

Let immigrants be
Immigrants also told me that people in New York and Barcelona just let foreign-born residents be themselves, allowing them to maintain their own identity while creating a new home.

From the point of view of immigrants, then, it’s the ratio between being specifically catered to and treated the same as anyone else that determines how welcome they feel.

The key to inclusion, in other words, seems to be to help immigrant integration without forcing it. 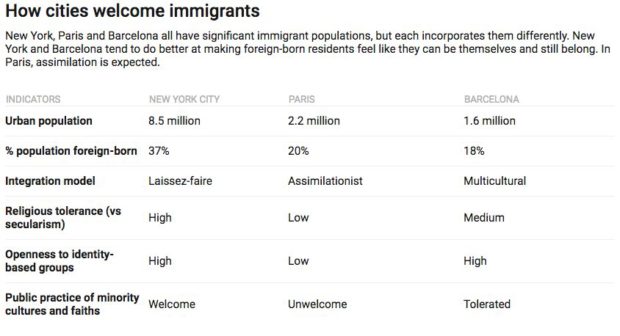 No city is perfect at this. In New York, Barcelona and Paris alike, I found that many immigrants were stuck in low-skilled jobs, working in restaurant kitchens, taxis and construction sites – no matter what they did back home.

All the immigrants I spoke with struggle to find affordable, quality housing in these expensive metropolises. Anti-immigrant politicians publicly decry them as “threats” to the nation.

And immigrants of color in these predominantly white countries reported being racially profiled by both police and residents, though that appears to happen much less often in New York City.

What Paris gets wrong
In my interviews, the first- and second-generation immigrants who most often reported that they struggled to feel at home were the ones who lived in Paris and its metropolitan region.

France has long embraced the idea of itself as a homogeneous secular republic. This notion endured even as the country colonized Muslim North African countries like Algeria and Tunisia in the 19th and early 20th centuries and recruited workers from those countries.

The secular ideal makes it difficult for French society to address the ways that immigrants may in fact be different than native-born French.

France’s national census cannot ask about racial or ethnic identity, for example. So policies designed to help minorities – such as affirmative action – are not only almost impossible there but also frowned upon as discriminatory.

Racial discrimination and racist comments are not uncommon in Paris. But France’s steadfast belief that it is a “color-blind” society means there is little interest in talking about racism.

Muslim immigrants living in Paris also told me that they felt Parisians expected them to assimilate – to abandon their home culture and become entirely and immediately “French.”

Support for ethnic and race-based organizations of the sort that proliferate in Barcelona and New York, is also seen as anti-French. As a result, immigrants in Paris typically practice their religion and cultural traditions in private. That isolates them from their neighbors and prevents most native-born French from learning about these newcomers.

This external pressure to conform quickly to the national culture makes immigrants feel less at home – and, based on my research, less likely to actually assimilate over time.

Ernesto Castañeda is the author of A Place to Call Home: Immigrant Exclusion and Urban Belonging in New York, Paris, and Barcelona (Stanford University Press, 2018); coauthor with Charles Tilly and Lesley Wood of Social Movements 1768–2018 (Forthcoming Routledge, 2018); editor of Immigration and Categorical Inequality: Migration to the City and the Birth of Race and Ethnicity (Routledge 2018); coeditor with Cathy L. Schneider of Collective Violence, Contentious Politics, and Social Change: A Charles Tilly Reader (Routledge, 2017).