By adminSunday 21 October 2012 No Comments

Ehsan Fardjadniya came to Amsterdam at the age of 19 and got his BFA in London. He is an active participant in the Occupy Amsterdam movement, an offshoot of the Occupy Wallstreet movement, and shares his views of the movement as an artist. After experiencing food poisoning during a sit-in he returns to the same location only to find a desolate and mostly abandoned area where only a view people wander around. 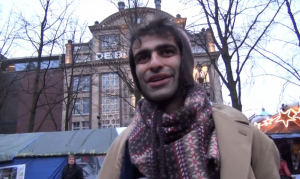