By Guest contributor(s)Tuesday 15 July 2014 No Comments 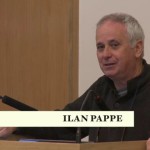 ´The Israeli-Palestinian conflict is, at its heart, a story of two peoples and one land. Both see history as their justification. Which means a historian who appears to change sides inevitably becomes a figure of enormous controversy. HARDtalk speaks to Israeli historian, Ilan Pappe who says the record shows that the Jewish state is racist; born of a deliberate programme of ethnic cleansing. Not surprisingly he’s widely reviled in his home country. His work has been both supported and criticized by other historians. Before he left Israel in 2008, he had been condemned in the Knesset, Israel’s parliament; a minister of education had called for him to be sacked; his photograph had appeared in a newspaper at the centre of a target; and he had received several death threat.´