By Guest contributor(s)Thursday 4 September 2014 No Comments 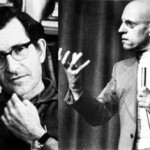 Excerpts from the historical debate between Michel Foucault and Noam Chomsky have passed the reverse many times in recent years. And there is frequently referred to these two thinkers. Here we will be showing the whole fascinating debate on philosophy and politics that in 1971 was recorded for Dutch television.

Noam Chomsky (1928): linguist, historian, philosopher, critic and political activist. As the “father of modern linguistics” (linguistics), he focused on the issue of innate vs.. the learned. In his later career has evolved as a major critic of foreign policy of the United States (from Vietnam to South America to the Middle East) and propaganda in the modern media with one of his major works “Manufacturing Consent: The Political Economy of the Mass Media”.

Michel Foucault (1926 – 1984): French philosopher, social theorist, historian and literary critic. In his work he researches power and its workings, how it influenced knowledge and how it is used as a form of social control. He is best known for his critical studies of social institutions such as psychiatry, social anthropology, the prison system and the history of human sexuality. One of his major works is “The Birth of the Prison, Discipline and Punish” (Discipline and Punish: The Birth of the Prison) on changes in the criminal model of punishing the body (corporal punishment) to punish the spirit.