By Guest contributor(s)Tuesday 17 February 2015 No Comments 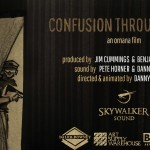 ” Back in October 2012, Ornana Films raised $30,000 through a Kickstarter campaign to produce Confusion Through Sand, an animation that “explores the spectrum of haze experienced by today’s soldiers in the desert.” It’s an interpretation, Ornana tells us, “of what happens when top training encounters circumstances beyond the realm of human control, in both interior and exterior conflicts.” The action takes place “on the ground, under the helmet of a 19 year-old infantryman.” Once completed, the film premiered at the 2013 SXSW film festival and took home the Jury Award. Now, a year later, it’s free online. And even better, it comes accompanied by a behind-the-scenes film that takes you inside the filmmakers’ artistic process, showing how they hand-animated the film with markers on recycled paper. Enjoy both. ”